Ed Jacobs reports on Carwyn Jones attempting to set a distinction between Welsh and UK Labour, and on his claim that Britain is quasi-federal today. 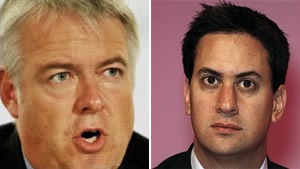 The Welsh first minister, Carwyn Jones has distanced himself from Ed Miliband’s public support for a pay cap in the public sector, concluding that it is unfair to expect public sector workers to face the pain of such cuts in the midst of an economic slump caused by the banks.

Miliband last week faced widespread union anger over his decision to endorse the government’s policy of a one per cent pay cap, a moment dubbed by the FT as the Labour leader’s “Clause IV” moment.

However, it is now apparent that it is not just the unions that are unhappy at the stance being taken on pay.

Speaking to journalists at the first in a regular series of monthly press conferences, Carwyn Jones was clear in his attempts to establish clear red water between him and London, concluding:

“I think it’s absolutely crucial that people see that those who are paid the most in financial services, those who the public believe were responsible for our current economic difficulties, pay their fair share as well.

“I don’t believe that this is being done and as a result I think it’s very difficult to say to those who work in the public sector, who didn’t cause the economic difficulties, that we have to bear the brunt of pay cuts when it isn’t happening in those sectors which are more appropriate.”

Meanwhile, as Alex Salmond is today expected to argue in the annual Hugo Young Lecture in London that England would benefit from Scotland gaining independence, his Welsh counterpart went on during his press conference to call for a much bigger, less Scotland centred debate about the future of the Union.

Against a backdrop of yesterday’s IPPR  report pointing to an English “backlash” against the devolved nations and the establishment last week of the UK government’s commission on the West Lothian question, Jones argued:

“It’s attractive to say ‘English votes for English laws’, but where does it leave us, for example, in terms of the EU where at the moment an English agriculture minister casts a vote on behalf of the whole UK on agricultural policy?

“So there are wider questions that need to be considered and that is the way in which the UK government wishes to go.

“It’s not in the UK’s interests to see the debate on devolution taking place mainly in the context of Scotland but also in quite in an incoherent way, in a way that’s not particularly joined up. I think there needs to be a more consistent approach for the good of the UK.”

Pressed about whether he was advocating a federal UK, Jones continued:

“The UK is quasi-federal now, and if the West Lothian commission decides on ‘English votes for English laws’ then that’s where we will be, in a situation of federalism.

“Now what we need to is to look at how we can make the UK into an entity where there is stability, of course, but also to make sure in a post-devolution world the UK functions as a state where responsibilities of different governments are clearer.”