Alex Hern covers the latest news from the occupy movement in the USA. 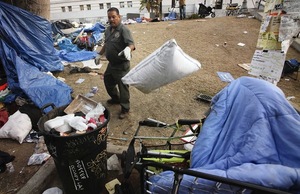 Occupy LA became the latest American occupation to be forcibly evicted today, as police moved in just after midnight to clear City Hall Park where the protestors had been camped for exactly two months.

Hundreds of police officers in riot gear swarmed out of Los Angeles City Hall early Wednesday, batons across their chests, surprising and engulfing the Occupy L.A. protesters who had been camped in the surrounding park for two months.

“Shame on you!” protesters shouted, as the officers ran to pre-assigned spots, instantly dividing the park into small, easily controlled segments. “Get back!” police shouted to those who came too close.

The operation began at 12:13 a.m., on orders from Deputy Chief Jose Perez, watching from the steps of Los Angeles police headquarters across the street.

Two minutes later, it was effectively over.

Through a combination of effective tactics, daunting numbers and — significantly — restraint by both sides, police managed to bring the encampment to a largely peaceful end, avoiding the melees that marred the eviction of protesters from similar camps in Oakland, New York and elsewhere.

The LA occupation had managed to survive through the wave of evictions which occurred two weeks ago, as Salt Lake City, Denver, Portland, Oakland, and New York City were all evicted on the same night. These evictions were, we now know, co-ordinated by Homeland Security, in a concerning extension of its powers.

Wonkette reported, in their characteristic manner:

Remember when people were freaking out over the Patriot Act and Homeland Security and all this other conveniently ready-to-go post-9/11 police state stuff, because it would obviously be just a matter of time before the whole apparatus was turned against non-Muslim Americans when they started getting complain-y about the social injustice and economic injustice and income inequality and endless recession and permanent unemployment?

That day is now, and has been for some time. But it’s also now confirmed that it’s now, as some Justice Department official screwed up and admitted that the Department of Homeland Security coordinated the riot-cop raids on a dozen major #Occupy Wall Street demonstration camps nationwide.

The reports of the conference call reveal that more was co-ordinated than just time:

According to this official, in several recent conference calls and briefings, local police agencies were advised to seek a legal reason to evict residents of tent cities, focusing on zoning laws and existing curfew rules. Agencies were also advised to demonstrate a massive show of police force, including large numbers in riot gear.

In particular, the FBI reportedly advised on press relations, with one presentation suggesting that any moves to evict protesters be coordinated for a time when the press was the least likely to be present.

The struggle for a legal reason to evict the protesters – the strength of the first amendment would likely render any attempt to directly end the protest illegal – also explains the mysterious obsession that has suddenly taken place in America with sanitation. All of which makes recent headlines such as “St Paul’s Cathedral cleaners outraged over ‘dirty protest'” in the right wing press a mite concerning.