IPPR’s Richard Darlington argues that simply using the stick to deal with Somali piracy will be ineffective - a carrot must be offered as well. 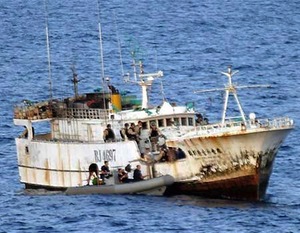 David Cameron’s announcement that UK flagged merchant ships will be licenced to carry armed guards has been interpreted as tough action to take the fight to Somali pirates. But on its own, it’s a move that could make a complex situation worse and put UK sailors at greater risk in the long-term.

“The evidence is that ships with armed guards don’t get attacked, don’t get taken for hostage or for ransom.”

But because of the seasonal nature of piracy in the Gulf of Aden, off the horn of Africa, the evidence also shows that attacks only happen when the sea is calm.

As Lt. Nathan Christensen of the U.S. Naval 5th Fleet explained to Stars and Stripes:

“It’s all weather-dependent… the monsoon season stopped and there was an increase in incidents of piracy.”

Unfortunately, the international community does not seem to have taken action during the off-season and are now reacting because the pirate season is back in full swing.

At the weekend, the prime minister said:

“The fact that a bunch of pirates in Somalia are managing to hold to ransom the rest of the world and our trading system I think is a complete insult”.

An insult it maybe but that doesn’t stop it being a growing phenomena that has now become international criminality on an industrial scale.

The numbers are mind boggling. Ecoterra International, a group that monitors piracy attacks, say that 50 vessels are currently being held by Somali pirates along with more than 800 crew. The International Maritime Bureau say that 49 ships were hijacked off Somalia’s coast in 2010 and that 1,181 people were taken hostage. 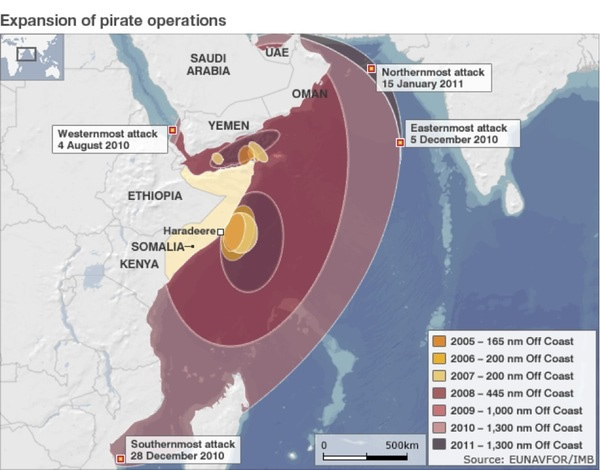 This spread of the problem is what is leading policy makers away from the methods that successfully protected commercial freight shipping through an internationally agreed path – policed by NATO warships – through the Gulf of Aden.

But when dealing with criminality on an industrial scale you need to take the same three pronged approach that deals with any type of organised crime.

This three pronged approach has been at the root of the success in Afghanistan in combating the opium trade and the poppy harvest.

But in Afghanistan, the scale of the international aid effort completely dwarfs the resources devoted to East Africa in general and Somalia in particular. With NATO troops on the ground for over a decade, rich countries have supported development in Afghanistan in terms of education, health, governance and alternative livelihoods for former poppy farmers. In Helmand Province, the UK aid effort operates side-by-side with the UK military and diplomatic service.

The comparison with the international effort to deal with former fishermen in Somalia is stark.

Somalia gets famine relief from the World Food Programme but British officials cannot be insured to work in Mogadishu, let along outside the Somali capital. Instead, they are based in Nairobi, Kenya.

There are some limited World Bank employment programmes, mainly building roads in Puntland, but nothing to rival the piracy industry and no investment in public services, nor a stable state for foreign donors to partner. The bravery of NGOs operating in such a hostile environment is matched only by the frequency of their kidnapping and ransom.

It’s an oversimplification but well worth noting that Somalia is almost three different countries:

Somaliland, relatively stable and petitioning the UN for independent nation status; South Central Somalia, where the American backed TFG continually battle the Al-Qaida backed al–Shabab, while a totally inadequate African Union peacekeeping mission (AMISOM) watches on in impotency; And finally, the middle bit, Puntland, the home of unimaginable poverty of the mass population and incredible wealth of a tiny number of organised criminal pirate bosses.

Some analysts suggest that pirates give as much as 50 per cent of their ransoms to al-Shabab as protection money, while others suggest much of the funding is channelled back to Al-Qaida controlling interests in Yemen.

Scotland Yard and the Serious Organised Crime Agency has even investigated the UK based maritime industry for a kind of insider-trading insurance-fraud whereby individuals in London provide intelligence about what ships, carrying what cargo, are sailing when and where.

On one level, the issue is completely bound up in global politics. But on another, the criminal technique is fairly simple and there seems to be a lot of very poor people prepared to take the opportunistic risk for the chance of a huge reward. More than 130 pirates, are being held in Kenya and there are another 750 Somali men in 14 different countries awaiting trial over piracy acts.

Pirates use small but fast fishing boats (skiffs) to get alongside their targets, then use noisy AK-47s to scare and slow their prey and finally grappling hooks and rope ladders to get aboard and secure a hostage situation. During the monsoon season the weather makes it impossible to do and if ships spot potential pirate skiffs early enough and sail full ahead, they can usually make it to a friendly naval warship. Here’s a ‘how to counter a pirate attack’ video.

The best policy response would have been for the international community to choke off ransoms some years ago, but because they didn’t it is now a huge industry in a part of the world that has little other connection to the global economy. The Kenyan foreign minister claims that pirates received an estimated $150m in ransom payments in 2009.

On an individual level, of course it is very difficult to argue that families should not pay ransoms to secure the freedom of their loved ones but the commercial values of cargos and the maritime insurance industry has in effect poured fuel on the fire. Who could blame the family of the British couple seized on a pleasure yacht from paying up? But on a policy level, the more ransoms that are paid, the more ransoms will be demanded.

Without co-ordinated action on this issue, progress on a political settlement in Mogadishu and the development of a viable Somali state, violence just leads to more violence.

If crew on UK flagged vessels are going to carry firearms it is better that they are licenced than not, but firefights on the high seas will only displace the problem and could escalate it, leading pirates to changed their tactics.

As Peter Hinchliffe, secretary general of the International Chamber of Shipping told Reuters:

“To date no ships with armed guards on board have been captured. But pirates will respond with increased firepower to overwhelm the armed guards, and when that happens the impact on the crew will be pretty dreadful.“

23 Responses to “Somali pirates need jobs or jail, not ransom or death”