Mark Davyd explains how Simon Cowell attempted to wreck his charity by copyrighting a name they'd used for years, and is now making them pay £8,000 fees. 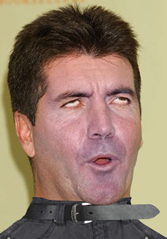 Mark Davyd is the Chief Executive of Rhythmix, one of the UK’s leading music charities.

This week has taken us from being a charity working with vulnerable and disabled children to facing a media blitz and onslaught. This would be great if the reasons were good and they were to the benefit of the work that Rhythmix wants to deliver.

Instead we find ourselves in a ludicrous legal battle with Simon Cowell, his Sony BMG backed company Simco and the X-Factor. This will cost us between £8000 and £20,000 in legal fees. Which we cannot afford.

Why? We have been forced by their actions to fight for our trademark which we own and operate under. Now we are feeling the corporate and legal backlash.

As a charity we work to better society and we want to do the right thing but we are faced with people who wouldn’t apparently know the right thing if it camped on their doorstep. To be honest, we don’t know how to manage it all. We need the law-makers and politicians of all sides and the ‘big society’ to come out and help us.

We believe in the politics of hope and we want to turn this situation around. We have to thank our local MP Caroline Lucas for coming out and supporting us with an Early Day Motion in the House of Commons. To date only 14 MPs have signed this but we are hoping that more parliamentarians who believe in social right will sign this.

The support from people such as Stephen Fry and Armando Ianucci has been great in raising awareness to our campaign, which, because of the costs, we still need to fight.

We believe the responsibility for the legal fees rests with Sim/SyCo. As they won’t comment about that responsibility, or even respond to us directly about what they intend to do about it, we have been forced to ask the public to help out. To date, they have very generously got behind this campaign to the tune of £4000.

There’s some humour here though. You have to laugh at the dark absurdity and irony of a situation where an industry with big labels such as Sony BMG, Syco and BPI fights so hard for copyright and trademark legislation because they are key to protecting the business and developing talent, then turns around and uses that legislation and the legal fees that come with it to slowly bleed a charity until we get out of their way.

It is simply wrong. We are at the hard end of corporate bullying, legal manoeuvring and we need all the help we can get to fight for our future.

A spokesperson for X-Factor apparently told the BBC:

“We are happy to withdraw the application for the trademark, as initially offered at the time of the name change to Little Mix. Syco have in fact been asked not to do this by the charity. We remain happy to withdraw it and we do not intend to use this name at any time in the future. We conclude this matter is closed.”

As has been reported previously, the reality is that Simon Cowell’s company Simco has still yet to cancel its application to legally trademark it; that the company’s legal representatives have ignored repeated requests by the charity’s lawyers to desist from actions that would result in it acquiring the trademark Rhythmix; and that they did indeed offer to desist from pursuing their trademark – provided we accepted a gagging order, leaving us high and dry for the legal fees.

None of that is in the weasel words of their PR statement. Because that’s all the information we have ever received directly from Simco; journalists phoning us to read out their latest PR presentation of how terribly ill informed a charity is.

No acknowledgement that their own actions provoked the entire episode, no explanation of who at the programme though it was a good idea to try and obtain exclusive use of a name that was already being used by a charity, no details of why they didn’t try and manage it in several hundred different ways that wouldn’t have put the charity in this corner.

Just an ever evolving series of PR statements.

We could try a ‘no win, no fee’ application, which this government are set to change under the Jackson reforms, but this again is draining our resources. All charities, including ours, are currently fighting for our existence in the face of government cuts and changes to arts, community and social funding.

Rhythmix was established in 1999 and we has helped 40,000 vulnerable children and young people, providing access to creative opportunities that help them to make a positive change in their lives. Our projects include work with young people with special physical or learning needs, looked after children, bereaved children, young people in secure units, excluded from school or at risk from crime.

We are forced to ask for public help and support. We are asking people to sound off for justice.

We’ve started a campaign called #CowellMustPay. This weekend, if you think it’s wrong for corporations to take what they want, to get what they want, to use their power and money to ride roughshod over “the little guy”, take the weekend off from making SyCo richer. Don’t vote X Factor.

Text your vote RTMX11 £1 to 70070. The first £8,000 we receive will pay off Simco’s responsibilty for their actions; simply take the money out of their pocket with your own vote. We’re asking the public to choose what matters most: three seconds of revenue for the already bloated pockets of SyCo, or 120 hours of music and creativity for some of the most vulnerable young people in our society?

Every other penny we receive will go to support vulnerable young being given a chance to make a positive change in their lives.

• Memo to Cameron: The rich give less to charity – Daniel Elton, November 4th 2011