Rory Weal writes about the need for a job creation programme, the reinstatement of the Education Maintenance Allowance and the protection of youth services. 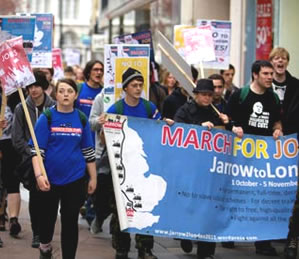 This weekend dozens of young people completed a 400-mile journey from Jarrow to London. They were then joined by hundreds more as they handed in a petition to number 10, pleading for a job creation programme, the reinstatement of the Education Maintenance Allowance and youth services to be protected.

Put simply, this march told the story of a generation of young people crying out for social justice. Young people are angry, they know they’re getting a tough time – but they know that times are only set to get tougher.

A crisis is set to hit Britain, a crisis of Britain’s youth. We are said to be the future, but a perfect storm is brewing, and is set to devastate the livelihoods of young people.

Tuition fees rising and the scrapping of EMA have hit the headlines, but beyond these two dangerous measures lies an untold story of how today’s young people are being hit. This crisis has been brewing since the economic downturn, and has accelerated dangerously since May last year.

A key ingredient in this cocktail is youth unemployment. On Saturday report identifying the ten blackspots for youth disengagement – cities where between one in five and one in four young people are not in education, employment or training (NEETs).

The report paints a bleak picture of a generation left behind, but equally significantly, it tells the story of a divided nation. The report identified the three areas in which youth disengagement is most prevalent as Grimsby, Doncaster and Wigan. All three regions have a ‘NEET rate’ of 25%.

David Cameron made it his mission in opposition to decontaminate the Tory brand, and paint himself as a one nation Tory – yet these figures demonstrate the UK is plunging into the dark and divisive days last seen in the 1980s. Access to education will also be seriously limited, with rail fares set to soar by 8% at the same time as cuts in local authority budgets have resulted in one in five supported bus services being cut.

Decreased access will further increase the NEET levels as more young people are left unable to participate in further education.

As the Work Foundation report says:

“Public sector cuts mean youth services and 16-19 education face reductions of around 20%… Unless urgent action is taken, the levels of young people who are NEET is likely to increase further still.”

Youth Centre closures provide the second element in this crisis. With councils hacking back at youth centres as well as youth services, young people are seeing the institutions they hold dear topple around them. Providing support in finding work and gaining new skills, youth centres offer a great deal to Britain’s young people, but are falling victim to drastic cuts in local authority budgets.

The third ingredient in this cocktail is housing. The Institute for Public Policy Research (IPPR) has released estimates (pdf) that England will face a “growing housing crisis” with a shortfall of 750,000 homes by 2025 at the same time as coalition cuts funding for social housing by 60%. It is today’s young people who will suffer from this housing shortage.

It is these crippling attacks on young people’s livelihoods that are creating the anger we are seeing among Britain’s youth. Unemployment, limited access to education and a housing shorfall are providing the foundation of this crisis. The Jarrow March 2011 epitomises this sense of burning injustice young people are feeling.

But with rafts of measures that are hammering the young and vulnerable, matters look set to get worse; a generation is being left behind, and if action is not taken then we will be paying the price for years to come.