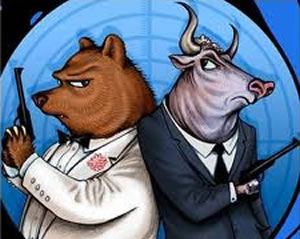 Reading the parallel columns by Jackie Ashley and Douglas Alexander in yesterday’s Guardian was not the best way to start the day.

While both are correct about the danger arising from Britain’s mindless ignorance of the implications of Eurozone collapse – and Jackie is rightly scathing about the way in which democracy was overridden last week in Greece and Italy – neither writer makes the obvious point about the political power of bond markets.

“When I die I want to come back as the bond market because apparently it’s more important than the fucking Pope!”

There is no lack of evidence about how the international financial markets have grown so powerful that they can ride roughshod over democratic decision making. (See, for example, Furman, Jason and Joseph E. Stiglitz (1998): “Economic Crises: Evidence and Insights from East Asia” – Brookings Papers on Economic Activity 2 (1998):1 {114}.)

In Clinton’s case, because his plans for extending health care reform and other social benefits were deemed ‘inflationary’, long-term bond yields rose precipitously and the reforms were duly scrapped.

In Britain, the Osborne’s economic policies are essentially driven by the City of London, and in the past week, like it or not, we have seen democratically elected leaders in Greece and Italy toppled by the bond vigilantes.

Such events may be shocking for citizens of the richest OECD countries, but the machinations of international finance are well know in the world’s the poorer regions, be it Argentina, Brazil, Mexico in the 1980s and 1990s; Indonesia, Malaysia, Thailand and South Korea and Russia in the 1990s; and perhaps best known, Argentina’s default of 2001-02.

Obviously, domestic corruption and economic mismanagement figured in each of the above countries. But there is no denying the fact that the herd instinct of financial markets played a key role in their destabilisation.

The irony is not just that destabilisation in the eurozone will continue, but that politicians will allow it to continue. Mario Monti is an economist and Lucas Papedemos an ex-Central Banker, but both these allegedly neutral ‘technocrats’, a quite meaningless phrase, will attempt to push through a package of austerity measures dictated by the EU/ECB/IMF troika.

It is patently obvious that although both countries may have bought a few weeks’ time, the measures are bound to fail.

In both cases, the underlying problem is not so much indebtedness as lack of growth – Italian growth has been flat and Greek growth disastrously negative.

As first year economics students will know, a country’s public debt-to-GDP ratio grows whenever the interest rate on the debt exceeds the rate of growth. In short, ‘austerity’, far from lowering the debt ratio, will raise it – at some point in future bond markets will attack these countries even more viciously than they have in the recent past; contagion will spread, and rumours of eurozone collapse will multiply.

Need this happen? The answer is a clear ‘no’; were the ECB to use the €3trillion at its disposal to provide an unconditional guarantee for all Eurozone sovereign bonds (ie, to act as ‘lender of the last resort), permanent calm would be restored, and the ECB would in practice need to purchase very few bonds.

But the German centre-right coalition opposes such a move and has the backing of the country’s constitutional court. The centre-right coalition preaches ‘bankers’ economics’ and above all represents the interests of finance. And to put matters bluntly, the financial sector – not just in Frankfurt but in London – is making loads of ‘dosh selling credit default swaps and shorting sovereign bonds.

Robert Skidelsky might well have been speaking not just for Britain but for Europe and the USA when he told the House of Lords in March:

“As things stand, the banks are the permanent government of the country, whichever party is in power.”

• Eurozone crisis update: From the analytical to the hysterical – Alex Hern, November 11th 2011

• Eurozone must pool its debt for any chance of halting the crisis – Ben Fox, July 15th 2011

29 Responses to “How the bond markets shackled European democracy”