Tim Holmes explains why you should join UK Uncut on Westminster Bridge on Sunday to fight the coalition’s disastrous health and social care bill. 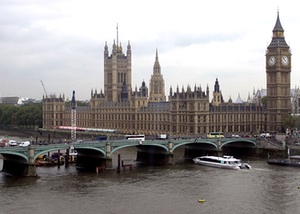 On Sunday, Westminster Bridge will witness a spectacular mass occupation. This event, organised by UK Uncut, will seek to block the government’s health and social care bill, due to face a lords vote on Tuesday. In the run-up to the vote, activists have been contacting the key Lib Dem and Crossbench lords to encourage them to oppose the bill.

Those taking part have good reason to be angry. It is difficult to think of a more flagrantly anti-democratic stitch-up than Andrew Lansley’s proposals for the NHS. They were in neither the Conservative nor the Liberal Democrat manifesto, and appeared nowhere in the coalition agreement.

Quite the reverse, in fact: explicit promises were made against such “top-down reorganisations”.

As one senior Tory told Sky, “it wasn’t in our manifesto, so we’ve got no mandate for it”. There is simply no evidence of any public desire or support for these proposals.

Nor is it clear why the dire need for this kind of “revolutionary” change arises. Public satisfaction with the NHS has never been higher; studies have repeatedly demonstrated its outstandingly efficient and effective public health provision. The government’s suggestions to the contrary have been shown to be both cherry-picked and utterly misrepresentative.

Its claims of “evidence-based” policy too have been exposed as selective and mendacious. The government had supportive GPs  specifically selected to present to the public in a desperate attempt to convey an – utterly misleading – impression of consent among the medical community. And its feted “listening exercise” – a response to the outcry against the reforms from the medical establishment and the public – proved little more than a sham, with the government privately refusing to budge on its core proposals and simply re-labelling previously organised outreach events.

In fact, the government appears to be responding to the priorities of a rather different constituency.

The Tories have been bankrolled to the tune of hundreds of thousands of pounds by private health interests. Senior Tories and their advisers who helped draft the legislation have strong links with the same interests. So too do the corporate-funded front-groups and think tanks who have lobbied hard and helped forge the health and social care bill, successfully securing “a tsunami of reorganisation” offering “massive opportunities for private health companies”.

Almost regardless of the bill’s content, there has seldom been a worse point to pursue another costly “re-disorganisation”. The government has imposed an astonishing £20bn of “efficiency savings” on the NHS – a level never previously achieved by any health service, anywhere in the world, at any time, and roughly double the private sector’s efficiency gains in the decade up to 2007.

In reality, this means devastating cuts, with massive lay-offs of frontline staff already taking place. Both of these, too, we were promised never to see take place. Into this mix the coalition will be “tossing a hand grenade” at the existing NHS management structure.

Many of the staff consequently jumping ship are likely simply to be re-hired, possibly by private firms, in a massive and dizzyingly rapid overhaul of the NHS’s management. The roll-out of this more fragmented system across England is likely to be incredibly expensive – with costs that could easily run out of control. Many experts have predicted catastrophic results.

But the contents of the Bill are just as devastating. It is widely acknowledged that these reforms will effectively abolish the NHS in England. They also represent a rapid and radical stepping-up of the steady privatisation overseen by previous Governments. And their consequences are likely to be grim.

To begin with, the Bill removes the responsibility of the secretary of state for health to provide a comprehensive health service in England – a central principle of the NHS. Democratic accountability will effectively disappear, and no such requirement is imposed on the new management structures. As the FT has noted, “national standards for care are to be abolished”.

All hospitals will be turned into money-making foundation trusts, organised much like private businesses. Scarce resources will necessarily be allocated on the basis of profit, not need.

Unless they are specifically protected, highly-valued but costly departments, such as A&E or maternity wards, may simply be closed, many hospitals ending up as little more than “glorified health centres”. That’s if they survive at all – many will simply go to the wall, leaving patients without the appointments, operations and services they expected and need.

Foundation trusts can generate revenue by treating private patients – and the cap currently limiting the number of private patients they can treat will be lifted. The result will be a two-tier system, with paying customers fast-tracked to the front of a growing queue of ordinary NHS patients. “As the private healthcare providers flourish”, predicts one commercial pharmacist, “the NHS will become a last resort”.

The Health service will be cracked open, allowing private companies to step in – with some already planning to take over hospitals.

With sharp constraints on the NHS budget in place, this can only force incumbents into atrophy or collapse. Profit-motivated companies are likely to cherry-pick the operations they provide, offering cheap, easy treatments, and leaving the public to pick up the tab for the rest. By competing to undercut each other, they could drive down standards across the board.

New consortia will see medical practitioners commissioning services for patients. But the system will be riddled with conflicts of interest.

GPs will be both buyers and suppliers. Worse, they will always have one eye on costs – particularly in the absence of economies of scale – and will be under pressure not to provide costlier treatments and referrals. They will even be able to impose charges, choose what to charge for, and pocket the “savings” made as income. The results for the relationship of trust between doctors and patients could be fatal.

Overworked and overwhelmed medical practitioners, lacking experience and expertise in commissioning, are likely either to divert scarce time and effort into management; to (pointlessly) re-hire management staff, while the public eats an estimated £1bn in redundancy costs; or to bring in private businesses (with preparations already underway) who can then siphon off the “savings” they make.

Providers will be required to avoid “anti-competitive” practices – enforced through the ever-looming threat of legal action, naturally to the benefit of those companies with the deepest pockets. But this will fragment the system even further, potentially punishing doctors for recommending trusted specialists, sharing expertise, developing relationships, or co-ordinating their activities in the “complex care pathways” required to treat long-term conditions.

As such fragmentation becomes the norm, trainees’ ability to gain a sufficient breadth of knowledge and experience will be in jeopardy.

“If someone is trying to strangle you, there is only so long that you can say: ‘Would you mind using only one hand, or would you mind using a breath freshener?’ At some point you are going to have to give them the old Glasgow kiss. These are not reasonable people; we must not allow them to destroy our NHS.”

This week will be perhaps the public’s last chance to fend off our assailant before England’s NHS passes into history. In joining UK Uncut’s action on Sunday, we might just be able to prevent the unthinkable from taking place.

46 Responses to “UK Uncut: Stop the traffic to stop the NHS being run over”