Alex Hern covers the resignation of Roger Helmer MEP, and reminds everyone what a terrible, rotten, nasty, bigoted man he is. 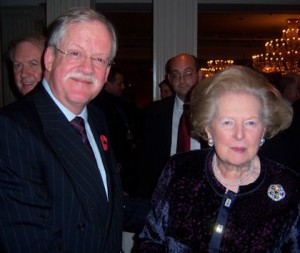 The Guido Fawkes website today reveals Roger Helmer will no longer be an MEP from December 31st.

“I am writing to you now to advise you that I shall be resigning my seat in the European parliament effective December 31st this year.

“As with any major decision, this is driven by a number of factors. Some might say that it is high time I stood aside for a younger man.

“For myself, I think that twelve-and-a-half years banging my head against the same brick wall in Brussels is perhaps long enough. And I should certainly like to see more of my three fine grandsons.

“But it would be disingenuous to deny that my decision is dictated in part by my increasing disillusion with the attitudes of the Conservative party.

“I am finding it ever more difficult to defend the policies of the Coalition, not only on my key issues of Europe, and of climate and energy, but on a range of other matters besides.”

Although it would be preferable for him to leave immediately, his absence from politics is cause for celebration. You may remember Helmer as being the nadir of the modern conservative party.

He shot to infamy in May this year when he ‘defended’ Ken Clarke’s comment that there was ‘rape’ and there was ‘serious rape’, saying:

The first is the classic “stranger-rape”… The second is “date rape”. I think that most right-thinking people would expect a much lighter sentence in the second case. Rape is always wrong, but not always equally culpable.

While in the first case, the blame is squarely on the perpetrator and does not attach to the victim, in the second case the victim surely shares a part of the responsibility, if only for establishing reasonable expectations in her boyfriend’s mind.

Helmer wasn’t even disciplined for these sickening comments, but that should come as no surprise, given his previous form.

In August last year, he called poor kids “a bunch of feckless ne’er-do-wells”, and said that the reason they didn’t get in to good schools was because they had inherited poor intelligence, and in October 2009 he made a bizarre comment that one of the world’s leading climate experts concerns about the impact of meat farming on carbon emissions were:

“…not surprising, perhaps, seeing that in terms of faith he is a Hindu.”

It is a shame that Helmer was left to resign on his own terms, rather than being thrown out for his terrible statements, but either way, it is good news that we have seen the back of him.

10 Responses to “Roger Helmer MEP steps down. He will not be missed”