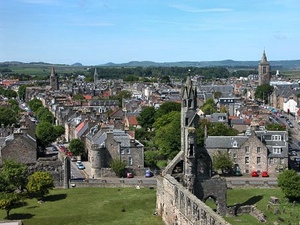 Students from the elsewhere in the UK looking to study in Scotland face average tuition fees of almost £7,000 a year for a 4 year degree which remains the norm north of the border. The figure was revealed after the University of the Highlands and Islands became the final Scottish university to set its fees for students from England, Wales and Northern Ireland at £7,500 a year for the first three years with the final year being free.

It comes after SNP education secretary, Mike Russell, announced that whilst tuition would remain free for Scottish students studying in Scotland, those from elsewhere in the UK could be charged anything up to £9,000, making Scotland potentially the most expensive place to study within the country.

Following the final announcement, in her assessment of the state of tuition fees in the country, Seonag MacKinnon, BBC Scotland’s education correspondent sought to make a comparison between Scottish universities and supermarkets, concluding:

“It sometimes feels as though the language of the supermarket has now spread to universities. At Aberdeen, for example, you can now buy three years of education and get one free.

“At Glasgow the special offer is a £1,000 discount for new customers, or rather students, in their first year. And that means the total charge of £26,000 undercuts that in other ancient universities.

“Among the surprises – on the day the ancient university of Glasgow announced its fees, the University of the West of Scotland (Paisley) announced higher fees. Edinburgh and St Andrews plan to set the cost of the common four-year degree course at £36,000.

“With varying fees on offer to students from England, Wales and Northern Ireland coming to Scottish universities, market forces now appear to have spread to Scotland.”

Responding to the final university to declare its fee levels, Mike Russell sought to argue that it was all for the good of Scotland, concluding:

“Scottish students and their parents have long had the reassurance of knowing that undergraduate education in Scotland will remain free. To maintain opportunities for our students, and to protect our world leading universities’ reputation and competitiveness, we had no choice but to respond to the increase in tuition fees to £9,000 south of the border.”

Yet for the NUS in Scotland, the representative body of the very same students Russell spoke of, the policy remains tantamount to discriminating against non-Scottish students.

Outlining his objection’s the union’s president north of the border, Robin Parker explained:

“When you look at the fact that over 40% of students from England, Wales and Northern Ireland study at Edinburgh and St Andrews universities, where degrees will cost £36,000, the real average degree will cost over £30,000. This figure doesn’t even take into account the additional year of living costs in Scotland. This system is one that simply allows principals to cash in on students from the rest of UK, and that’s unjustifiable.”

Yet as the debate continues over how to fund Scotland’s higher education system, Ministers at Holyrood will no doubt be looking at developments within Northern Ireland before their next steps.

As with Scotland, in September, the Alliance MLA and Stormont minister for employment and learning, Stephen Farry, told the Northern Ireland Assembly that whilst Northern Irish students would be paying tuition of £3,500 a year, those from England, Scotland and Wales would could be made to pay up to £9,000 a year.

At the time of the announcement, the Ulster Unionist Chair of the Assembly’s Employment and Learning committee, Basil McCrea argued that the Executive was leaving itself open to legal challenge and sure enough, that challenge looks set to come.

Reports suggest that 18-year-old Abel Middlebrough from Worcestershire is considering taking the executive to court, based on a breach of human rights, after he found out that as a result of deferring his entry to Queen’s University in Belfast to 2012, he faces tuition of up to the £9,000 rather than the £3,500 he might have done if he had studied this year.

Outlining the basis of his case, he argued:

“It’s wrong, it’s blatant discrimination and it seems to be being put there for no reason. Having to pay £27,000 instead of about £10,000 is going to have a big effect on my finances and it came completely out of the blue.”

The move comes after it was announced in August that a similar case would be made against Scotland tuition fees policy.

• The idea £9k fees would be the exception was always a pipe-dream – Aaron Porter, March 2nd 2011

12 Responses to “Are the devolved nations playing supermarket sweep with tuition fees?”