As Labour begins its annual conference in Liverpool, the issue of independence for Scotland now seems to be concentrating minds, reports Ed Jacobs. 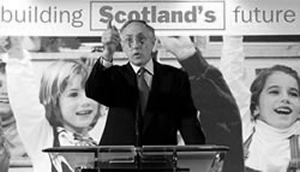 As Labour begins its annual conference in Liverpool, the issue of independence for Scotland now seems to be concentrating minds, with politicians of all parties slowly waking up to the threat Alex Salmond poses to the Union.

Speaking to the Sunday Express, Glasgow South MP, Tom Harris, who earlier this month confirmed his intention to stand for the leadership of the Scottish Labour party, issued a stark warning, concluding of the next elections to Holyrood in 2016:

“By the time the next election comes around, if Labour don’t make the right decisions, Labour will no longer be a player. There’s no God-given right of the Labour Party to be a player or an alternative government.

“We are not taken seriously today. We are not saying anything that’s relevant to people. Nobody cares who the next leader of the Scottish Labour party will be.

“This is a life or death election for us. I think it’s quite conceivable the Labour Party could stop being relevant in the next few years.

“It happened to the Tory party. That could happen to the Labour party.”

Yet for Scottish Labour, the key date is not the next elections to the Scottish Parliament, but the referendum, due to be held before, on the SNP’s raison-d’etre – independence.

Earlier this month, the Herald reported on the first poll which showed support for independence edging ahead of those against. Likewise, polling by Angus Reid has put the SNP on 49%, ahead of nearest rivals Labour, who languish on 29%.

The threat of independence therefore remains a very real possibility and Labour has a mountain to climb to regain the trust and confidence of the Scottish people. And make no bones about it; it is only Labour that stands any real or credible chance of leading the no to independence campaign.

Whilst news in the Independent on Sunday suggests the UK government is to step up its efforts to combat Alex Salmond’s remorseless campaign for independence, with much greater focus, attention and scrutiny of Salmond himself, the reality is that this is just what he wants.

In May the Lib Dems had what can only be described as disastrous elections to Holyrood, and their stock remains low, with even its leader at the time, Tavish Scott, speaking of the party north of the border having been dragged into the “political gutter” by the actions of the Lib Dems in Westminster.

Likewise, Scotland is now faced by a confused message from the leading candidate for the leadership of the Conservative in Scotland, Murdo Fraser, with his conclusion that whilst he supports the Union, his party is better off going independent and severing formal ties with London to end its association with the “toxic” party being led by David Cameron.

If the coalition in Westminster is to step up its efforts to campaign against independence, it takes little imagination to realise how Salmond would feed off such criticism, doing what he so masterfully did in May’s elections and portray himself as the champion of Scotland, fending off the ‘nasty ConDem government’, and the opposition of English politicians.

No credible anti-independence movement can be led by David Cameron or Nick Clegg. It is only Labour, a party which saw its share of the vote increase in Scotland in the 2010 General Election that can do what Scotland needs – provide the critique of the Cameron-led government whilst simultaneously being able to stand up for the Union.

Whilst proposals for a new, beefed-up role of Leader of the Scottish Labour Party is a necessary step to show the party’s own structures  reflect the realities of devolution, as Sarah Boyak, MSP for Lothians, and co-chair of the review of Scottish Labour herself explained to conference, changing structures alone will not win Labour elections in Scotland.

When Labour did so disastrously in Scotland in May it did so for two reasons, neither of which were related to the party’s internal workings. It lost because its strategy was wrong at the start, forgetting the threat in Scotland was not the Tories as they sought to portray the campaign at its start, but the SNP. Fighting the Conservatives in a Scottish election was a failure to recognise who the enemy really were.

But Labour lost also because, as has previously been noted, the party’s talent in Scotland had migrated south, with the lure of the Commons stronger than that of Holyrood. Whilst he did his best, the press’s constant dubbing of Iain Gray as being ‘Gray by name, gray by nature’ was in many respects a sign of how Labour in the Scottish Parliament has simply lost the talent it once had, the potential leaders with the stature of Donald Dewar, the father of devolution who so dominated Scottish politics.

Whilst policy does matter, when faced with a politician with the abilities of Alex Salmond to communicate, to stoke up grievances with London and simply to get himself in and on every possible newspaper, and radio and TV programme, Labour now needs someone who can match him in all these areas, someone to credibly take on the Salmond machine, to stop it in its track and ultimately save the Union.