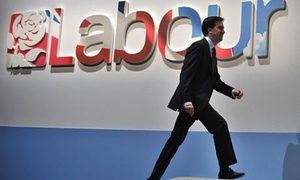 In a speech likely to be remembered for a 10 minute interruption in TV and Radio coverage, Ed Miliband has delivered a speech to his party conference with a message of fairness.

Calling for a “new bargin” based on a “something for something culture” and hard work, Miliband called for a sense of responsibility at all ends of the social spectrum.

Taking Fred “the shred” Goodwin as an example, he argued that he should never have been given the pension he had and that Labour should never have knighted him, going on to list journalists and MPs as having also failed the responsibility tests. For those on benefits too, there was an indication that recipients should be rewarded for doing all they could to come off it whilst also doing more to address the problem of those who cheat the system. Likewise, on the issue of social housing, there was a clear message that in processing waiting lists, local authorities should take into account those who contribute to their communities.

Calling for a “new economy”, he outlined Labour’s support for British business; putting himself firmly side by side with those affected by the decision not to award Derby based Bombardier a contract for new trains and BAE systems today.

In a message to the unions meanwhile, he called on them to engage co-operatively in his new agenda, supporting productivity and enabling UK firms to compete, an attempt to sooth expected troubled waters during the winter.

Strikingly however, despite the seriousness of the situation, no mention was made of how Labour intends to campaign and stand up to the SNP’s relentless campaign for and independent Scotland, a missed opportunity for Labour to regain the initiative.

How the speech goes down with tomorrow’s press awaits to be seen, and will be mulled over for many hours in the bars of Liverpool, but Miliband, who declared himself to be his own man, has a clear agenda – of fairness, of responsibility across the social and political spectrum and of a need to stand up for those in the middle, struggling to make ends meet. The framework is now there – it’s time to put flesh on the bone.

8 Responses to “Miliband calls for a something for something culture”