It’s time to set out the agenda for a managed but clear process for Greece, followed by other countries, to secede from European Monetary Union and the eurozone. 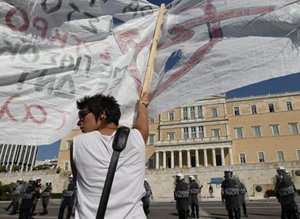 It had to be both the best and the worst financial joke in the world… And there it was headlining in the Financial Times – an organ of record not noted for its forays into satire and stand up.

In the week Greece has had to ask for another €8 billion on top of the €109 billion rescue package already agreed, the FT (£) announced:

“A work-to-rule by Greek tax officials”

Now forgive me for finding some levity in what is a horrendous situation but wasn’t this a large part of the original problem? That they never collected the taxes in the first place?

Over the past few months a tightening recession has reduced the tax receipts anticipated when the rescue was put together last year which is why Greek finance minister, Evangelos Venizelos, popped his request for an extra €8billion in a conference call to the ECB, IMF and EU Commission last week.

The European Central Bank clearly believes Greece simply cannot be allowed to fail and has now stepped in to the market to replace dollar funding of sovereign bond purchases amounting to between €40 and €50billion. This strategy to buy Greek bonds in an attempt to hold down their yield has, however, proven both remarkably expensive and sadly ineffective.

Of course German and French banks have a combined exposure to Greek sovereign debt that provides a straightforward explanation for their political agreement to such stoic generosity. But we should now be questioning whether this is not just to postpone the inevitable.

Each instalment of the rescue fund is accompanied by stern questioning as to whether Greece has done enough cutting of jobs and services, enough selling off of infrastructure and assets to warrant release of the next tranche of bailout. The Greek people are suffering enormously, but the two underlying problems remain; one for Greece, the other for Europe.

The problem for Greece is it is locked in to a currency that is too strong for its economy. To grow it has to be competitive and to be competitive it needs devaluation. For the rest of Europe the underlying problem is what it always has been: the impossibility of imposing fiscal controls on independent sovereign states.

Greece is enduring a death of a thousand cuts but the net effect is only to tide them over until the next opportunity to default and to perpetuate the myth that a common currency is desirable without a common government.

It is now time to radically reappraise European Monetary Union and the damage it will continue to do to those living both inside and outside the eurozone itself.

In 1973 Europeans worked 102 hours for every 100 of a worker in the USA; just over thirty years later our work rate had fallen to just 82 against the American’s 100. In Europe we now work less, pay ourselves more and are less productive than our global competitors and yet different eurozone economies are moving at widely different rates and refuse to submit themselves to a single clear and united fiscal policy.

When Greece joined the Euro, the ECB and the continent’s leaders chose to ignore the fact she lied about her budget figures. The Maastricht criteria – drawn up to tighten the fiscal rules – were blatantly flouted by Germany and France in quick succession and now the German population have shown their understanding and sympathy for their bankers’ predicament is not limitless.

Last Sunday’s election results sent a tough message to Angela Merkel when her junior coalition partners, the Free Democrats, lost all their seats in the Berlin city parliament.

This has prompted Wolfgang Schäuble, the German finance minister, to give the first quiet ultimatum to Greece:

“The payments to Greece are contingent on clear conditions.”

In other words: membership has its price.

But it may be that membership is no longer on the table.

Germany has had a strong economy because it made structural adjustments at the time of reunification and has been able to sell competitively priced goods of high quality to its overspending European neighbours in a period of global growth.

But whether membership is on the table or not, Greece will default. She will do so because this is what is in Greece’s own best interests. Instead of straining every economic sinew to be locked in as the pauper of Europe in perpetuity, the Greek people will realise growth and productivity will only come after they have borne the stigma of default.

After a return to the drachma, there will be dislocation and tragedy and Greece will have to sell assets and re-price its goods until they become competitive but a sudden depreciation is no more than what Argentina did in 2001 nor than the United States itself did in the 1930s.

George Osborne of course says this must not happen. But this is based more on preference than analysis. What is quite extraordinary is that Osborne, despite his insistence that a collapse of the euro would be of enormous damage to the City of London, has not insisted the UK has a seat at the table and a major say in what the troika are doing.

US Treasury Secretary Tim Geithner came to Ecofin, but Osborne has no seat in Frankfurt. If we in Britain have just as much to lose then why do we not have a voice? The first week of the party conference season has seen both he and the Liberals focus on the 50p rate of tax – a complete irrelevance in fiscal terms – but the real issue of the euro scarcely mentioned on the conference stage.

British politicians who sensibly kept the UK out of the euro, should now be setting out the agenda for a managed but clear process for other countries to secede from Monetary Union. Greece would take it in a trice, Portugal and Ireland would follow and Spain and Italy would eventually overcome their pride.

The markets do not want a managed dissolution of the euro, because the markets are a zero sum game and they only make money at someone else’s expense. They are waiting to pick each country off in turn and profit from the chaos. Labour should be charting a strategy to ensure they cannot.

During World War II the government propaganda department thought up a slogan intended to capture the spirit of true British grit. That slogan, “Keep Calm and Carry On”, is today emblazoned on everything from tee-shirts to tea-mugs and can even be found as a poster adorning the walls for a new generation of students in this year’s Freshers’ Week.

And now? It appears to have been formally adopted as the official motto of the eurozone. It may have been right in 1940; it is wrong now.

In the UK George Osborne is behaving like the boy in the football crowd who hopes against hope his team is going to win but knows in his heart it is extremely unlikely. Lest one should be mistaken about the UK’s potential exposure here, it is important to understand the size of the London market means UK banks stand to suffer losses amounting to billions of euros should Greece default.

In addition to this the UK contribution to the IMF bailout funds would not be returned in the event of a default. Osborne should insist the UK, even though not a member of the European Monetary Union, should be a key party to the decision making about a solution.

Eurozone must pool its debt for any chance of halting the crisis – Ben Fox, July 15th 2011

11 Responses to “Time to move beyond the eurozone”