As the world yesterday united in remembering the victims of 9/11, faith leaders the world over, of all religions, called for healing, writes Ed Jacobs. 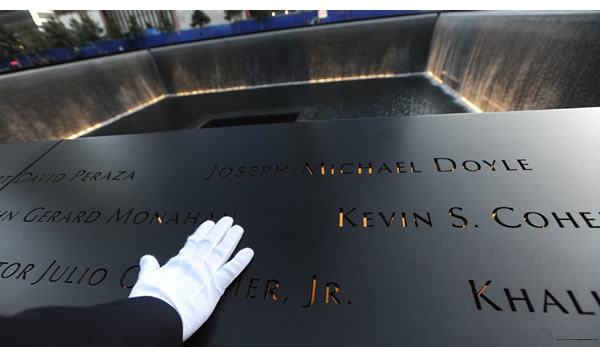 As the world yesterday united in remembering the victims of 9/11, faith leaders the world called for a period of healing, and sought to take on the idea that Al-Qaeda, led by Osama Bin Laden, were, on that day, engaged in activities somehow inspired by God.

Outlining its condemnation of the attacks, the Muslim Council of Britain said:

“Ten years ago this week, we witnessed the loss of thousands of lives during the horrific terrorist attacks on the World Trade Centre. As Muslims we look back with sadness at what happened on September 11, 2001, it was undoubtedly an evil and criminal act of monstrous proportion. Muslims the world over have nothing to do with such an act of hate and destruction that drove the 9/11 bombers.

“Our prayers today are for the three thousand innocent lives lost, and thousands of other innocent men, women and children who have since lost their lives elsewhere as a result of the senseless wars unleashed in its wake.

“On this anniversary, we recall with regret that this attack has been used to falsely accuse our cherished religion of Islam – a religion of humanity, being a target of irrational anger and hate, setting a global course of retaliatory action with little respect for human life, national sovereignty and rule of law.

“Terrorism is a crime and the perpetrators are not representatives of any faith, colour or race.”

In America, meanwhile, the Catholic Archbishop of Miami, Archbishop Thomas Wenski – whilst calling for us never to forget the events that unfolded on that dark day – went on to add:

“If in the face of evil we allow ourselves to hate, then we risk becoming what we most deplore. Our hearts too can be blinded by the darkness of hate. Jesus urges us to forgive seventy times seven. But forgiveness is not a case of amnesia that wipes out the past. Rather it is an experience of healing that drains the wound’s puss.”

Picking up on the issue of reconciliation, Canon Jim Rosenthal of the Grosvenor Chapel, which hosted the primary service of remembrance in London, argued:

“Remembering such horrific scenes is not easy. But remembrance is not static – it’s a constantly growing and evolving action, which gives us the opportunity to take hold of the past and transform it to reach out with grace, understanding and healing.”

The Vatican published the text of a letter from the Pope to the Archbishop of New York, Timothy Dolan, also President of the United States Conference of Catholic Bishops, in which the Pope wrote:

“I join you in commending the thousands of victims to the infinite mercy of Almighty God and in asking our heavenly Father to continue to console those who mourn the loss of loved ones. The tragedy of that day is compounded by the perpetrators’ claim to be acting in God’s name.

“Once again, it must be unequivocally stated that no circumstances can ever justify acts of terrorism. Every human life is precious in God’s sight and no effort should be spared in the attempt to promote throughout the world a genuine respect for the inalienable rights and dignity of individuals and peoples everywhere.”

And whilst US flags were being burnt outside the US Embassy in London on the day of the anniversary, The Archbishop of Wales, Dr Barry Morgan, and the Secretary General of the Muslim Council of Wales, Saleem Kidwai, issued a joint statement in which the primary focus was on the need for faiths to work together in combatting extremism.

Reflecting 10 years on they declared:

“The after-effects of the attacks on the New York World Trade Centre and on the Pentagon, ten years ago this week, changed the world.  Here in Wales, a determination quickly emerged to challenge the climate of heightened fear, suspicion and distrust created by so-called religious terrorism and the response to it.

“The Church in Wales and the Muslim Council of Wales, for example, set up a project called ‘Finding a Common Voice’ to bring together Christians and Muslims to face and tackle some of the most difficult issues raised by the international situation – including prejudice, stereotyping, education, the role of women, and terrorism.

“Working together has broken down barriers, built positive relationships, and underlined a passionate commitment to create a more harmonious society.

“This weekend, we remember and pray for the victims of terrorism, denounce the use of religion to justify violence and urge people of all faiths and cultures to continue working together so that we can live as God intends us to – side by side in mutual understanding and respect.”