New polling dats provides welcome reassurance multiculturalism and the embracing of religious and racial diversity in the US is far from dead, reports Tom Rouse. 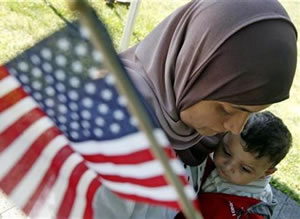 With the 10th anniversary of 9/11 fast approaching, it is inevitable that the Muslim community and its standing within America will come under scrutiny.

New research (pdf) published by the Pew Research Center confirms the worryingly stark divides that exist between how the US’s Muslim community perceive themselves and how they are perceived by the general public.

Nearly a quarter of the overall US population (24%) believes support for extremism is increasing amongst Muslim communities, but only 4% of Muslim Americans agree with the same statement.

However, 21% of Muslims surveyed acknowledged they saw “a great deal or fair amount of support for extremism” amongst their community, although this figure was still a good deal lower than the general population’s stance, which stood at 40%.

In spite of this divide, the research offers welcome news, making clear there has been no growth in either extremism or feelings of alienation amongst Muslim Americans. Only a tiny minority of those polled showed support for terrorist atrocities carried out by groups such as Al-Qaeda.

As Graph 1 shows, these figures contrast sharply with those from Muslim communities in other states, where it is clear that despite efforts such as President Obama’s Cairo speech in 2009, the US is failing in its efforts to win the hearts and minds of Muslims across the world.

Given their current flagging poll ratings, the Obama administration will draw some comfort from the strong support they retain amongst Muslim America, a group which traditionally exhibits strong Democratic leanings and whose support Obama cannot afford to lose in 2012.

Seventy six per cent of those surveyed approve of Obama and his policies, with a noticeable increase compared to the Bush administration in those who believe US efforts to combat terrorism are sincere, with 43% supporting efforts compared to just 26% four years ago.

Despite this strong support for the Obama administration, concern still remains about the quality of life for Muslim families living in America. Twenty one per cent of respondents said they had been singled out by airport security while 13%  spoke of being picked on by other law enforcement agencies.

Similarly there has been an increase since 2007 in the attitudes of those polled towards surveillance of Muslim communities, with 39% now believing they come under greater surveillance than the general population.

In spite of these fears, what is remarkable and reassuring to those who support multiculturalism is that 56% of Muslims polled believe that Muslim immigrants to America want to embrace their host nation’s customs and way of life.

However, amongst the general public this figure drops to 33%, demonstrating the worrying influence of the scaremongering of Glenn Beck, Fox News and their ilk. Such reticence is not born out by the facts, with 47% of Muslim immigrants applying for US citizenship, a much higher rate than the general population.

Although more work clearly needs to be done to break down the fears and prejudices of many Americans, this data provides welcome reassurance multiculturalism and the embracing of religious and racial diversity in the US is far from dead.