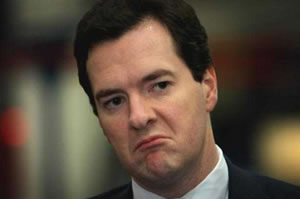 Today’s Financial Times has drilled an alarming number of holes in George Osborne’s much-spun anti-tax evasion deal with the Swiss authorities last week. The Tories had gleefully tweeted how “nobody would have anticipated we would conclude an agreement with Switzerland to tackle tax evasion”, with loyal right wing commentators hailing the deal.

The criticism that “better than nothing is not good enough” will prove harder to spin, however.

In its leader, entitled “evading evasion”, the FT says (£):

“The UK government says the agreement will secure £6bn worth of absconded tax dues for the UK Treasury. That is better than nothing.

“But the real test is whether it is now sufficiently unattractive to violate UK tax law and whether this was the best possible deal. The answer is no.

“First, evaders will still pay less than if they had gone by the law. The withholding tax on investment returns is below the top rate in the UK – by a quantitatively marginal but symbolically significant difference. The one-off levy, too, is unnecessarily forgiving for principal that was not taxed when it was first earned.

“Second, this is an anti-evasion measure that seems all too easy to evade. The one-off tax will only be levied on accounts still open after May 2013. That is plenty of time for evaders and their Swiss bankers to discuss where it might make most sense to place the money next. Lichtenstein, which has a less taxing agreement with the UK, is being mentioned, but there is an abundance of other tax havens.

“Third, though the deal is not presented as an amnesty, it is hard to spot the difference. To let account holders who can keep not declaring their accounts settle their tax liabilities by paying less than regular UK residents smacks of permitting some people to pay their way out of obeying the law.”

“It is hard to imagine that no better deal could be had. Switzerland until recently got away with facilitating the breaking of other countries’ laws – mainly because those countries let it. That Bern is yielding shows that pressure works.

The FT’s last point, about the lack of a global deal to tackle tax evasion, echoes Left Foot Forward’s criticisms of the deal last Thursday; as Daniel Elton wrote:

“Campaigners had hoped for a comprehensive tackling of tax avoidance to be on the agenda for the G20 meeting in November, when governments could have set up an information exchange system between themselves to track down avoiders. This unilateral action by the UK government, and such alleged action by Germany, essentially sells smaller countries without the same clout down the river.”