Analysis of Tory policies show the average person will be worse off, while new data on police numbers and crime also show Tory cuts are making you less safe. 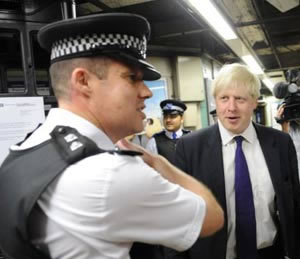 A small but growing number of commentators have analysed the way Tory policies make the average person worse off. New data released on police numbers and crime also show the way Tory cuts are making you less safe.

Even the Tories admit that the recession, which their cuts policies are deepening, will raise the threat of crime. In particular crime is increased by the cuts in welfare benefits – which is what the Tories are concentrating on.

The Times reported (£) on June 29th on the opinion of senior police officers on this coming increase in crime:

“It won’t be an even, upward progress, there will be a ragged line with different patterns in different areas and some crime types shooting up, while others remain level,” one said.

Chief constables and criminologists say that there is usually a gap between the worst of the financial crisis and the impact of austerity on the public before the effects are reflected in crime patterns.

They believe that crime will rise more dramatically as sections of the public feel the impact of public spending cuts, unemployment and, perhaps most significantly, cuts in benefit payments.

As The Times reported (£), some crimes are already going up:

Kenneth Clarke, the justice secretary, told the Commons last week that burglary was one of the crimes that is “rising at the moment”, adding: “It is going up rather alarmingly compared with a year ago.”

“There are indications that crime is about to turn. The reason it has not gone up yet is because unemployment has not risen that much,” one minister admitted.

Yet confronted with this rising threat of crime the Tories are actually cutting police numbers. The report (pdf) published by Her Majesty’s Inspectorate of Constabulary (HMIC) on July 21st confirmed there will be 16,200 fewer police officers in the UK as a result of the Tory led government’s cuts.

This increase in various types of crime is already feeding through into London. After the Tory Mayor of London has made Londoners worse off through his unnecessarily large above-inflation fare increases, the Conservative-led government and the Tory Mayor are additionally making Londoners less safe.

Burglaries, robberies and muggings are on the rise for the first time in years as fears grow among ministers that the economic downturn is driving up crime.

Figures from Britain’s biggest police force provide the first indication that years of falling crime are coming to an end. The Metropolitan Police has reported big increases in robbery, burglary and motor vehicle crime in the past 12 months…

Robbery, including muggings, pick-pocketing, burglary, shoplifting, theft of bicycles and interfering with motor vehicles increased, the Metropolitan Police report says. Figures show that there were more than one thousand more burglaries last month compared with May last year.

Yet despite this trend the Tory Mayor is pressing ahead with cuts in in police numbers. In the last year police numbers in London were already cut by 926. By 2014 there will be 3,111 fewer Metropolitan Police staff including 1,907 fewer officers, 820 less PCSOs, and 324 less police staff.

Tories – talk and not action on crime

These trends show clearly the picture which always exists: the Tories, whether as the UK government or as the Mayor of London talk a great deal about crime but take actions which increase it – both by deepening the recession and by cutting police numbers.

As Ken Livingstone said about the situation in London:

“Boris Johnson’s cuts mean on average every London borough will lose over 50 police officers. These cuts risk undermining the work which the police and local communities are doing to make our streets safer.

“The Conservative Mayor’s cuts will mean some of the most experienced and able officers losing their jobs, including 300 of the 600 sergeants who manage local police teams.”

The story is the same across Britain and in London: the Tory-led government and the Tory Mayor make you less well-off and less safe.

• Burglaries, robberies, muggings on the rise… is the downturn to blame? – Shamik Das, June 29th;

• Cooper: Tory “reputation” on law and order “was only ever rhetoric” – Tom Rouse, May 22nd.