The longer the EU/IMF continues along its current path, the greater the chance of a second major financial catastrophe, engulfing not just Greece but much of Europe. 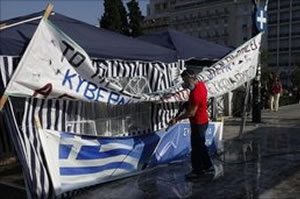 How many times does it have to be repeated? The Greek bailout is not about saving Greece; it is about squeezing the country enough to make sure a number of large banks who hold Greek debt (and an even larger number of banks that have lent money to them) don’t go broke.

Until recently, many northern Europeans appeared to believe Greece had been living beyond its means and therefore needed to tighten its belt – just as most Brits appear still to believe that Britain faces such a fate. But has austerity helped Greece pay its way? Not at all; austerity has only made things worse.

Before the crash of 2007-08, Greek GDP was growing at more than 5 per cent per annum. As a result of the dramatic programme of cuts agreed with the EU/IMF last year, Greek GDP has fallen 8.5% since January 2010.

As the FT’s Martin Wolf recently reported (£), when last year’s cuts were announced, the spread between German and Greek bonds was about 460 basis points (4.6%). It is now 1460 basic points. In effect, Greece has been locked out of the world’s private financial market. The country’s debt-to-GDP ratio is now 160% and rising.

The Greek Parliament has now approved the latest €28bn austerity package demanded by the EU/IMF in order for them to disburse an extra €12bn in funding which Greece needs to get through the next month without defaulting. But this package, which survived a second Parliamentary vote last night, is so deeply unpopular that it seems unlikely to be fully implemented.

As protesters are now chanting on the streets:

“First they robbed us, now they have sold us.”

Even if it were fully implemented, the package would merely deepen the Greek recession making it even less likely that the debt-to-GDP ratio will fall.

Nor does the latest French ‘Brady-bond’ proposal really fit the bill. While lengthening the maturity on Greek debt to 20-30 years and establishing a fund to guarantee its repayment may be a good idea in principle, there are several problems with the plan.

First, it covers only a relatively small proportion of Greek sovereign debt; secondly, it is unlikely to satisfy the private banks (Deutsche Bank has already criticised it) and, most important, even if accepted ‘voluntarily’ by the banks, the rating agencies may still consider Greece to be in default. See P Jenkins and R Milne, ‘EU “Brady bonds” plan for Greece’, FT (£).

Is there any way out? Basically, there are two possible paths.

The first is for the EU/IMF to keep pouring money into Greece, in essence buying time for private banks to reduce and write off their debts. Once this is done and assuming ordinary Greeks can be squeezed for several more years, Greece will be allowed to default. The problem here is twofold.

First, will the speed with which the ECB, the IMF and the ESF (European Stability Facility, which starts working in 2013) buy up debt be enough to prevent a Greek political meltdown? Remember that if the Papandreou government falls, the opposition leader Mr Samaras has said he will reject EU/IMF conditionality. The second problem is that outright default might lead to Greece leaving the euro, and a return to a (rapidly falling) drachma would leave the country facing high inflation, falling real wages, and an even higher debt mountain.

There is another possible outcome – although it would require an astonishing u-turn on the part of the EU/IMF. The alternative is for all or most of Greek sovereign debt to be ‘forgiven’, for the German, French (and Greek) banks to be recapitalised, and for Greece to receive enough assistance to bring its social and economic infrastructure up to a level which would help ‘crowd in’ private investment and restore its economy to health. This is the ‘Marshall Plan’ scenario, if you will.

I can hear the reader object that pigs are more likely to fly; but the longer the EU/IMF continues along its current foolish path, the greater the chance of a second major financial catastrophe which would engulf not just Greece but much of Europe.

18 Responses to “Greece: The game is nearly up”