How do we embrace full democracy, reflect wider society, allow faith to flourish and treat people of all faiths and none equally; answer: a fully elected House of Lords. 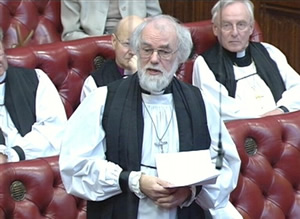 Last week saw the President of the United States, Barack Obama, create history as the first American President to address both houses of parliament in the medieval splendour of Westminster Hall. A rare privilege for a foreign leader which, until last Wednesday, was afforded only to French President Charles de Gaulle in 1960, South African President Nelson Mandela in 1996, and to Pope Benedict XVI in 2010.

Obama’s speech will be remembered for one key message: Our greatest strength is our diversity.

“Unlike most countries in the world, we do not define citizenship based on race or ethnicity.

“Being American or British is not about belonging to a certain group; it’s about believing in a certain set of ideals – the rights of individuals, the rule of law. That is why we hold incredible diversity within our borders.”

And of course, Obama is correct. If we look at London as a case point: 270 nationalities speaking more than 300 different languages make up the fabric of the city, cementing London’s status as one of the most diverse cities on earth.

In the UK as a whole we also see great diversity.

According to the 2001 census our country has significant Islamic, Hindu, Sikh, Jewish, Buddhist and of course Christian communities in all its major cities, with Catholicism now the largest Christian denomination in the UK. Furthermore, although each country that makes up the UK has a long tradition of Christianity, the 2001 census found them all to have a relatively low level of religious observance, with significant sections of British society now largely secular.

The President argued that diversity is “how we define ourselves as a nation” and that “our patchwork heritage is an enormous strength”. Obama also accepted, however, that if neglected, diversity can lead to tension. If we also accept this as true, then we must ask ourselves how Britain can ensure we recognise and value our diversity – utilising the ideas, energy and work ethic the world can bring to our country, rather than allowing potential to go unnoticed.

One of the best ways we can do this is by ensuring our democracy mirrors the diverse society we live in, in the hope that our parliamentarians will be tuned in to the needs of minority communities and take decisions in the interests of all our people. Although the Commons is only at the start of its journey, we can see improvements.

The May 2010 general election returned a record number of black, Asian and minority ethnic (BAME) candidates to parliament, almost doubling their representation in the Commons (from 14 to 27). The number of women in the current parliament also went up from 128 (19.8 per cent) to 143 (22 per cent), placing the UK just above the world average, which sits at 19 per cent. Nonetheless, the current composition of the Houses of Parliament still does not reflect the diversity of the population.

Political parties have a responsibility to offer the public a wider choice of candidates – something they do not do at present. Where they have, the electorate have time and again embraced diversity. Indeed, one of the virtues of the Commons being a democratically elected chamber is that when given the choice, it is the citizens collectively who have the final say.

The Commons, however, stand alone in the palace of Westminster when it comes to embracing democracy. The ‘other place’, the House of Lords, Britain’s upper chamber – which holds the authority to amend or reject bills and from which many junior ministers and cabinet ministers are appointed – remains well and truly chained to the past.

Membership of the Lords is not by means of a democratic election but attained by inheritance, by appointment, or by virtue of their ecclesiastical role within the established church (Lords Spiritual).

The recently published government white paper on Lords reform, which seeks to introduce an 80 per cent elected second chamber, is a welcome move in the right direction which will inevitably result in greater diversity in the Lords in terms of age, gender and background. Nonetheless, these proposals do not go far enough.

The inclusion in the white paper of a 20 per cent appointed chamber option is a cause for concern. However, it is the proposal to allow 12 Church of England bishops to retain their seats as Lords Spiritual that could fundamentally hold the House of Lords back from democratisation and diversification.

Indeed, the only global equivalent is the ‘Islamic Consultative Assembly of Iran’, which gives Islamic clerics similar privileges to Church of England bishops. In modern Britain, this system is clearly an outdated one which does not enjoy the support of our citizens.

An ICM poll commissioned by the Joseph Roundtree Reform Trust as part of the Power 2010 political reform initiative found that two-thirds of the public think anyone who sits in the House for Lords and votes on laws should be elected, and 70 per cent of Christians believe it is wrong that some Church of England bishops are given an automatic seat in parliament.

The case for reform of ecclesiastical representation in the Lords is strong; yet, the shape this reform should take is still the cause of much debate. Some groups, like the British Muslim Research Centre, argue the Lords should be opened up to other faith groups – with appointments from the Islamic, Jewish, and wider Christian communities in the upper house.

This, however, brings its own problems: within the main Christian umbrella faith groups in the UK – Roman Catholicism, Methodism, Baptist, Pentecostal, Eastern Orthodox, and Oriental Orthodox – there are many sub faith groups, all of whom would have the right to make a case for representation in the Lords alongside the Islamic, Hindu, Sikh, Jewish and Buddhist communities.

If poorly managed this process could pit one faith group against another in a campaign for Lords appointments, dividing rather than uniting people of faith.

Additionally, although widening the representation of faith groups in the Lords would assist in making it more diverse, it would not make the Lords any more reflective of our now largely secular nation, and indeed may skew the picture further. Most notably though, increasing faith based appointments to the Lords will not tackle the ‘democratic deficit’ that comes with selections without elections; only a 100 per cent elected upper chamber will bring about true democracy to the British parliament.

Those in the established church are understandably concerned with this option, calculating that the abolition of the Lords Spiritual could reduce the role of religion in British society. This, however, does not need to be the case.

Mr Obama’s visit this week allows us to reflect on America’s own form of secular democracy. America’s constitution – both pluralistic and secular – ensures that the United States does not favour one religion over another, and that political authority never lies in the hands of an established church.

It is this secular constitution that has prompted freedom and diversity of religion in the U.S., becoming, as U.S. Secretary of State Hillary Clinton said:

With no established church, or singular faith/denomination favoured above others, religion has been allowed to flourish in the United States, which today has more than 2,000 religious denominations. Religious organisations are free to speak out on the issues of the day – to preach, pray, and, if they wish, even endorse candidates. And candidates themselves can seek the votes of religious organisations, and talk openly about how central their faith is to their politics.

So, as we reflect on President Obama’s visit and his message, let us also reflect on our democracy, asking ourselves what steps can be taken to ensure our parliament embraces full democracy, reflects wider society, and treats people of all faiths and none equally, while still allowing faith to flourish.

The answer, I believe, is a fully elected House of Lords.

17 Responses to “Diversity and democracy: Reforming the Lords”