Richard Exell takes a look at the latest job figures, which show some positive movement but also worrying signs for women and the over 50s. 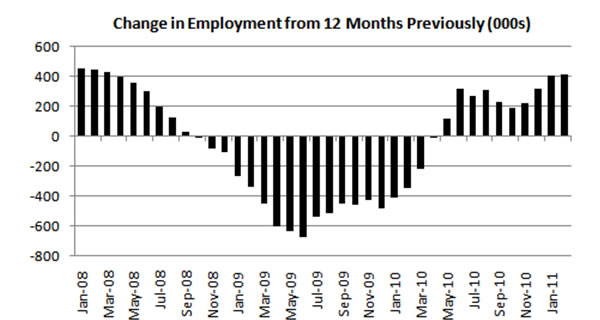 There is good news in today’s employment figures (pdf) from the Office for National Statistics.

The number of people in employment, 29.24 million, and the employment rate, 70.7 per cent, in January-March, were up from October-December, by 118,000 and 0.2 points respectively. This is the third successive quarter-on-quarter increase and employment is now 416,000 higher than it was twelve months ago; this is very similar to last month’s figure:

Unemployment is 56,000 lower than in January–March 2010; this is not as impressive as the increase in employment and the current level is still 841,000 above the April 2008 figure – just before unemployment started rising: 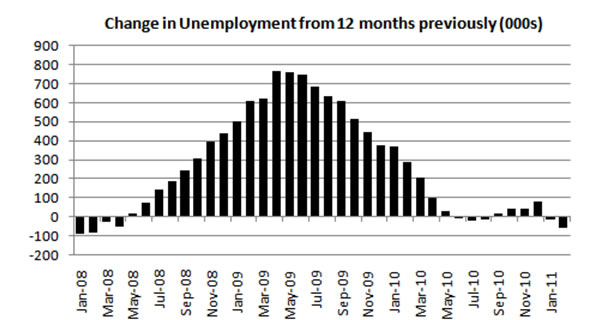 In the past year, decent monthly employment figures have sometimes been the result of an increase in ‘atypical’ employment – part-time and temporary jobs and self-employment. But this month the number of employees working full-time grew by 146,000 – more than the total increase in employment.

Another cause for concern in the past year is what’s been happening to women’s employment. In recent months, good overall results have sometimes disguised the fact that what has happened to men and women have been very different stories; in particular, women’s unemployment has risen while men’s has fallen. That is less true this month, though there are still worrying differences between what is happening to men and women.

The increase in women’s employment is very welcome, but the fall in unemployment is quite anaemic and it is still true that, despite overall declines in joblessness, women’s unemployment is 57,000 (0.3 percentage points) higher than it was a year ago.

The claimant count measure of unemployment did not move in a positive direction. For the second month running, this measure – the number claiming Jobseeker’s Allowance (JSA) – rose while the ILO measure fell. As Scarlet Harris has pointed out on Touchstone, this probably has a great deal to do with the increasing numbers of lone parents having to switch from Income Support to Jobseeker’s Allowance.

The policy of progressively moving lone parents onto JSA began under the Labour government. Whatever the merits this policy may originally have had, it was designed in response to debates that were current before the global financial crisis, the rise in unemployment and the spectre of public sector job cuts.

There must be a question mark about its relevance to a situation where women’s unemployment is still high and the forthcoming cuts will hit employment opportunities for women especially hard.

There are other aspects of today’s figures that suggest we are not out of the woods yet.

While youth unemployment came down, the number of unemployed people aged over 50 to 64 rose by 14,000. This is rather worrying, as older workers have not previously been as hard hit in this recession. In previous recessions, older workers were more likely to be made redundant and then found it harder to get back into employment, it would be very worrying if that were to happen again.

Probably the most worrying item in today’s figures is the falling number of job vacancies: the provisional figure for January–April is just 469,000, a decline of 30,000 from the November-January figures. Although the overall picture today is quite encouraging this is a worrying marker for the future.

• The Chartered Institute for Personnel and Development’s Labour Market Outlook (pdf) reports that “near-term and medium-term employment prospects remain uncertain and subdued compared with pre-recession levels” and “together with the onset of public sector cutbacks, the risk of an employment slowdown appears finely balanced”.

• The Bank of England’s Agents’ summary report (pdf) describes “steady” employment growth in manufacturing and “gradual” growth in business services, but elsewhere, a great deal of uncertainty related to the prospects for household incomes and public sector cuts.

• Markit’s Report on Jobs is probably the most positive, but even they describe a “two-speed jobs market”, and are unable to say “whether the private sector can create enough jobs to offset the expected job losses in the public sector”.

Last month I asked whether that month’s overall good results were a blip. It’s still a finely-balanced question.