The RSA's Dr Jonathan Rowson analyses prime minister David Cameron's Big Society concept, how it works and where it falls short in unlocking our "hidden wealth". 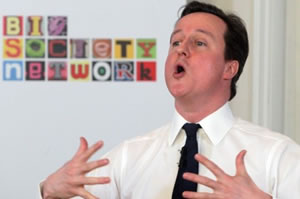 David Cameron’s speech on Monday was his fourth attempt to launch the Big Society, highlighting Francis Maude’s earlier admission that the government have “failed to articulate” the idea in a compelling way. The big idea in the Big Society is currently being lost in the detail. Maude, the minister with overall responsibility for the concept, could only promise they will “carry on explaining it as best we can”, but this statement hardly inspires confidence.

For almost two years the government have neglected to explicitly state what many implicitly value about the idea; namely that the Big Society could be about personal development through participation, and improving the quality and efficacy of our relationships.

When Mr Cameron speaks of his “profound faith in human beings” and describes “making society stronger” as the passion that gets him out of his bed in the morning, what he really means is that he wants strangers to connect, and help each other more than they currently do.

This core message of the Big Society is not getting through because a narrative of cultural change is always trumped by news of cuts. Relationships are less tangible than revenue, and the central role of people is obscured by the minutiae of policies.

Before the last election, Labour produced a video satirising the Big Society. A harried mother returns home from a stint as a teacher, social worker and lollipop lady and scrambles around a chaotic kitchen while responding to her plaintive children. She frantically reads sticky notes and picks up several different phones in order to fulfill her improbable roles as a police officer, parole board official and 999 Operator.

She responds to her daughter saying she is tired by saying:

“Well, we all are darling, that’s the Big Society for you.”

The caption at the end of the advert reads:

“Cameron’s Big Society: Where People do the things governments used to do.”

Curiously, the very same closing sentiment is presented by proponents of the Big Society, without irony, as a positive development; indeed the very heart of the coalition government’s policy agenda. To be fair, it is not difficult to imagine a similar satirical video, perhaps in the style of ‘Yes Minister’, about the incompetence of a distant managerial government, compared to the honest impact of engaged local citizens.

The point is whatever else we think of the idea, the credibility of the Big Society hinges on the viability of the demands placed on ‘people’, and the kinds of assumed competencies that are implicit in these demands.

Moreover, given that anthropological studies suggest the English are prone to ‘negative politeness’ and disinclined to ‘make a fuss’, while national attitude surveys suggest Brits are unusually afraid of strangers, and relatively authoritarian in nature, the Big Society demands on ‘people’ to participate and cooperate will be particularly acute.

A forthcoming report from the RSA Social Brain project, ‘The Hidden Curriculum of the Big Society’, argues that instead of framing the Big Society as an implausible technical (policy-driven) solution to socio-economic challenges, it can only work as an adaptive (personal and cultural) challenge to utilise and build our hidden wealth.

David Halpern describes hidden wealth as the value of our care-based exchanges, which are grounded in social norms of cooperation and trust. Compared to the relatively nebulous notion of the Big Society, hidden wealth is empirically grounded, and a strong driver of economic growth and national wellbeing.

Understood in this way, the curriculum of the Big Society, including mass participation and cooperation, seems to require us to gain certain key competencies that are involved in social productivity and cooperation, including responsibility, autonomy and solidarity. We argue that acquiring these competencies is not straightforward and entails significant developmental challenges, amounting to a hidden curriculum for a growth in mental complexity on a national scale.

To make the Big Society message bolder and clearer, we need to be more insightful about the emotional and psychological demands and rewards of participation. For the Big Society to work, we need to support adult development. Mr Cameron’s cultural change only becomes meaningful when we change our relationship not just to the state, but to each other and ourselves.