Following defeat in the Alternative Vote AV referendum, Green Party activist Matt Wootton conducts an autopsy into the failures of the Yes! To Fairer Votes campaign. 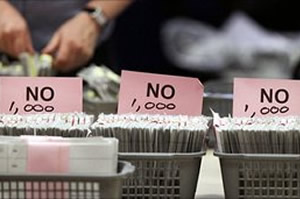 The noes have it, the noes have it; Matt Wootton, who studies Cognitive Policy with his colleague Rupert Read at the Green Words Workshop, looks at the reasons for defeat

So. We lost. However much we feared this was looming, we were working and hoping up until the last minute that it wouldn’t be so. What is there to say at this point? The awful feeling of Conservative hegemony maintained is depressing enough, without the feeling that progressives, Labour, Liberals, Greens did not do enough to help ourselves.

We didn’t realise soon enough the importance of the referendum on the Alternative Vote, and if we’re going to beat ourselves up about it, as we should do at least for a little while, let’s do it with some analysis.

There are 62 million people in Britain. If just one 30th of those had given one pound the Yes campaign would have had an extra £2 million to spend, right up to their spending limit. How many people in Britain describe themselves as left, Labour, Liberal, Green, or radical? Where were they all?

Say the Labour Party has 200,000 members, and the Liberal Democrats have 60,000 members. If each of those members had given £10 each, that’s more than 2½ million pounds right there. Yet this didn’t happen, even remotely – Labour splits aside. All of the internal party efforts seem to have been lacklustre, barely-funded and voluntary.

By contrast the Tories – who bankrolled to No campaign – lent their phone bank to the NO to AV campaign. And they were raising money even before the bill obtained royal assent, in order to circumvent spending limits.

The Tories aren’t stupid. They had a clear vision from the start how a No vote would benefit them. And they acted like it. It’s almost as if the other parties, most obviously Labour, just didn’t really take seriously that AV was something they had to make happen, not least for their own benefit.

One wonders what proportion of effort was split between the AV campaign and the electoral campaigning that parties had to undertake as usual. One also wonders whether the LibDems, Greens and Labour, having spent most of May 5th splitting each other’s votes, will now have ample time to consider whether they should have taken more time out from politics-as-usual in order to forge a greater joint effort against Conservative minority control, and how they could have communicated that to the public.

The referendum on the Alternative Vote was a once-in-a-lifetime chance to change politics for the better, and to mainstream red, green and liberal politics, and sideline Conservative. But the parties, their hierarchy, their supporters and the British public didn’t treat it like that. The radical left and Labour bickered amongst themselves, to the benefit of only the Tories. And if the communications, advertising and political skills of the official ‘Yes! To Fairer Votes’ campaign represent the pinnacle of those skills in the Labour and Liberal Democrat parties, then it shows how much those parties rely on tribal voting.

I’ve blogged extensively and critically about the Yes campaign at www.greenwordsworkshop.org; I’ve blogged about emotions, values and ‘cognitive policy’ and how the Yes campaign didn’t seem to know how to use any of them. But now is not the day to criticise them further. They’re feeling hurt too, as well they should be, and despite their shortcomings they did their best.

And the last people who should receive any criticism are all of those hard-working, street-pounding, keyboard-thumping individual people who sweated day after day, to make a Yes vote happen. I’ve worked with you. I’ve respected you. I’m grateful to you.

But somehow, if not individually but collectively, we have failed – even though we know that we are in the majority, and the Conservatives and Conservative voters are in the minority. We have failed. And with the tide now having turned against political reform in this country, we’re going to have several years to work out what happened, and what to do about it.