Craig Berry reports on the need to provide the UK's six million informal carers with support to prevent them falling into poverty. 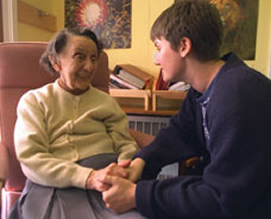 The Dilnot Commission was established by the government in July 2010 to make recommendations on the funding system for formal social care in England. It will report in the summer, and a white paper is expected by the end of the year. Yet the Commission seems not to be considering what is by far the most important (and under-funded) aspect of care delivery in this country; informal care provision by family and friends.

It is hard to imagine a fair and sustainable care funding settlement that does not address – and indeed radically improve – the state’s “offer” to informal carers. The numbers involved are staggering.

In 2007, the value of informal carers’ contribution to the provision of care in England was estimated by Carers UK and University of Leeds researchers at over £70 billion.

This is around four times the amount spent on care by public authorities, and dwarfs the purely financial contributions made by individuals and their families to their own care costs. Moreover, it is likely to be a significant under-estimate, given that it assumes for statistical validity that anyone providing care for more than 50 hours per week is providing care for only 50 hours per week.

We know that for many spousal carers, informal care can be a 24/7 vocation.

In defining the scope of its inquiry, the Dilnot Commission’s website states that:

“We are looking at all the different ways in which people, of all ages, are supported by the state… We are not forgetting the valuable contribution made by carers, families, friends and communities.”

Yet in including no explicit reference to informal care, the Commission’s terms of reference, determined by the government, confirm the impression that informal care is little more than an afterthought. The Commission is dealing with a very serious problem. Local authorities are spending around £17bn on personal social services for adults, with additional amounts invested directly in care through the NHS and the benefits system.

As demand increases, these costs are set to rise significantly in coming decades, leading to questions about the system’s fiscal sustainability. This is not to mention the short term crisis in care funding, the growing quantities of unmet need, and the system’s many absurdities such as the “postcode lottery“.

In seeking to fix a creeking formal care system, while keeping costs under control for the state, finding ways to encourage individuals to spend more on their own care, trying to minimise the spread of means-testing, eradicate geographical inequities and place a renewed emphasis on preventative care, it is perhaps understandable that the Commission has sought to avoid tackling informal care.

But without informal care, no matter what the Commission conjures up, there would be no care system in the UK. The current government seems to be replicating the previous government’s “cross your fingers” policy on informal care, that is, simply praying that it will persist, daring not to think about the immense challenge that an ageing society brings to informal as well as formal care provision.

There are around six million informal carers in England, most of whom receive very little support from national or local authorities. Around half are providing care for more than 20 hours per week. As DWP/University of York research has discovered, carers face substantial difficulties in finding and maintaining paid work. Yet the vast majority do not receive carers’s allowance, the benefit designed to compensate for loss of income.

In 2010-11, the allowance was merely £59.30 per week (it costs the benefit system around £1.5bn per year for around 0.5m recipients). It is only available to those providing care for more than 35 hours per week, who earn less than £100 per week from work (there are a string of other conditions, which explains low take-up even among those that are eligible). The paltry sums mean that the allowance is effectively meaningless as an earnings replacement.

In addition, according to the NHS information centre, only six per cent of informal carers have been offered a carer’s assessment by their local authority.

The coalition government has promised to do more to support respite for carers – which is one of the main concerns of informal carers – but has shown no appetite for developing a better offer more generally. There seems to be a missed opportunity here. Surely, the vast extent of informal care provision in England is a shining example of the Conservative party’s “big society” in operation.

Social care is not in desperate need for an expansion of formal care provision, because care needs are often amorphous and intimate rather than derivative of a specific condition, and informal care by relatives is often the best and most appropriate form of provision. If the state tried to colonise the sphere of informal care, it would almost certainly do a worse job.

Why isn’t this music to David Cameron’s ears? Because informal care highlights the paradoxical nature of the big society. People provide care for their loved ones not due to a sense of civic pride, but because it is a natural corollary of family life. They provide care even though the labour market punishes them for doing so. It is this situation, far more that the fiscal impact of formal care provision, that is unsustainable in an ageing society – and unconscionable.

The government doesn’t need to nurture a big society in the care system because it already exists. What it needs to do is reward carers, that is, end the marginalisation and pauperisation of those who provide informal care.

And if it doesn’t buy the moral case, surely the financial value of informal care means the Dilnot Commission should be making the fiscal and economic case for bolstering the informal system to the government.

3 Responses to “Action needed to save informal carers from poverty”