Sir Robin Wales, the directly elected Labour Mayor of the London Borough of Newham, asks how ministers at the DCLG are held to account for misleading the public. 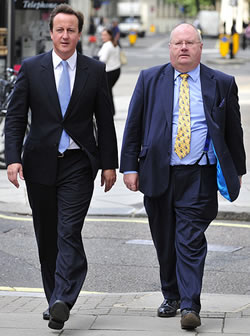 The presentation of the finance settlement for local authorities has been inaccurate, inconsistent and damaging to the reputation of councils and councillors across the country; Sir Robin Wales, the directly elected Mayor of the London Borough of Newham, asks how ministers are held to account for misleading the public

In the week the local government finance settlement has been confirmed, Parliamentary Under Secretary of State for Communities Bob Neill stands in Parliament telling members that no council will face a cut of more than 8.8 per cent this year.

For the first draft which came out late last year, it was 8.9%: so civil servants have clearly found some extra cash down the back of the sofa after the wave of criticism from local authority leaders about the scale and pace of the cuts. This wasn’t limited to Labour boroughs – only this week Blackpool’s Peter Callow, a Conservative leader, came out publicly to say this government didn’t understand the damage these plans would do to his community.

And of course, that extra percentage point announced by Bob Neill today will equate to only about £300,000 for my area of Newham. Without wishing to sound ungrateful it doesn’t come anywhere near to bridging the gap caused by a £44 million cut in one year. Or explaining why, as one of the poorest boroughs in the country, we’re absorbing the highest level of cuts.

We will do our best to manage through these tough times, and protect the services that matter to residents, but there’s no getting away from the fact that we are being hit hardest in local government: not least because the cuts in council services are being heavily frontloaded this year.

They are being made at a pace that is ruled out as dangerous and unmanageable in policing or the NHS. But what I really take issue with is the manifest dishonesty ministers have employed in their presentation of how much they are cutting out of our budgets.

Where does Bob Neill get his figure of 8.8% from?

What most people don’t know is that at the beginning of this process, when the provisional settlement was first proposed, the Secretary of State for Communities and Local Government, Eric Pickles, invented a completely new measure of local authority funding. This was called ‘Revenue Spending Power’. It was done to hide Mr Pickles’s cuts.

The new measure included – for the first time ever – the council tax which local authorities collect. It also included, as Professor Colin Talbot of the University of Manchester has highlighted, £1bn of NHS money which has already been counted as part of the NHS budget. We still don’t know how much of this we will be able to spend, or what new duties will be attached to it. In addition, the measure used as its baseline the Emergency Budget in June – which had already significantly reduced our income from last year’s settlement.

So it wasn’t a comparison from one year’s settlement to another’s: and it didn’t show us the year on year cuts.

In Newham this bit of jiggery pokery from the Department for Communities and Local Government masked the fact that this year we will receive £43.7 million less from central government, which is in fact a cut of almost 14% of the total. This scale of cuts is reckless and puts at risk much of the improvement in services achieved through the previous Labour government’s investment.

And a day or two later, Eric Pickles himself used a different way of measuring cuts, telling the public that spend per head of population was the way to judge whether the finance settlement was fair. This, according to the DCLG, was an attempt to ‘demystify’ the funding system. The fact that this was presented in the interests of transparency would be laughable if it didn’t have such a serious impact on my streets.

Politicians present figures in a way that works for them. There is nothing new about that. But two different figures in a week is quite something. I can’t recall this kind of political manipulation being applied to the finance settlement before, and quite frankly it shows patent disregard for the public. At a time when the greatest cuts to public services ever are being coldly implemented – whatever the cost to the economy – perhaps it’s naïve of me to expect some honesty about spending policy.

And perhaps the fact that ministers aren’t even comfortable presenting the truth of their damaging cuts finally shows that this government does have a conscience hidden away somewhere. Small consolation for my residents, who are on the receiving end of the most brutal local government cuts in the country.