Alex Salmond was prepared to support a referendum on Scotland’s constitutional future that excluded an option for full independence, new WikiLeaks cables have revealed. 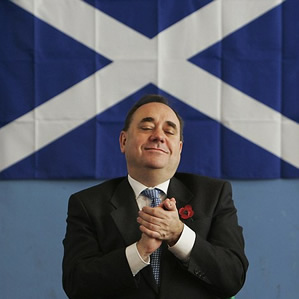 Alex Salmond was prepared to support a referendum on Scotland’s constitutional future that excluded an option for full independence, according to the Sunday Herald. In an exclusive, the paper’s Scottish Political Editor, Tom Gordon, has quoted extensively from leaked material from the WikiLeaks website, detailing the content of a memo from the US Embassy to Washington shortly after the first minister hosted a reception in January 2010 for the US Ambassador in Edinburgh.

“The SNP tell us privately they would also support a referendum if the vote was only about further devolved powers.”

The memo, however, was drafted just months after Alex Salmond had said that whilst he was prepared to accept other options on a ballot paper, including an option for full independence was the SNP’s red line.

He told the Andrew Marr programme in October 2009:

“We prefer a straight question and we’ve set out what that question might be.

“However, I’ve also indicated that if it was necessary to obtain the parliamentary majority in the Scots Parliament to have a third defined option on the ballot paper, which could be done with a couple of questions or by preference voting, then I would be prepared to discuss that and probably prepared to concede it as long as independence for Scotland is on the ballot paper, which is our sine qua non.

“That’s the thing we must have. People must have the opportunity to exercise a right of self-determination. But I’m not frightened of another option on the ballot paper as long as that option is defined and meaningful, as long as it’s something that people can understand and not some you know vague proposition.”

In September, the SNP were forced to postpone plans for a referendum on Independence in the current session of Parliament as a result of a lack of support from MSPs. At the time, Salmond pledged to make it a core part of the SNP’s campaign ahead of May’s elections to Holyrood.

He told Radio Scotland at the time:

“It will be a transcending issue of the election campaign. [The] only alternative to a decade of despair, of Tory Westminster cuts, is to have the financial independence for the parliament to generate more revenue, more wealth for Scotland and give us a better future.”

The emergence of the latest diplomatic cables have been seized upon by opposition parties as a sign of the SNP saying one thing in public and another in private. Scottish Labour leader Iain Gray, who will hope to find himself in Bute House in May, concluded:

“It is deeply embarrassing for the First Minister to be caught out saying one thing to people at home and another thing to American diplomats. That duplicity will haunt him because the SNP have spent far too much time worrying about independence and not enough time focusing on the things that really matter, like jobs.”