Simon Hughes thinks the Lib Dems are guiding the coalition in a progressive direction. But the economic damage done to Britain's communities - including his own - overshadow any good. 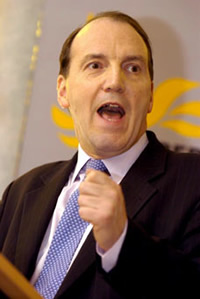 In his column for last week’s New Statesman, Simon Hughes set out what he saw as the progressive influence of the Liberal Democrats in the coalition. Some of these reforms deserve credit and support, but the economic damage done to Britain’s communities – including his own – overshadow any good that is taking place.

Simon Hughes made a bold claim at the start of his article:

“We start the year not just in government but ensuring every week that progressive policy is agreed upon and implemented.”

While on Sky this morning, Hughes said:

Certainly there are many progressives who will support the advances in “constitutional and political reform” that Hughes cites. House of Lords reform is unfinished business from the previous government, a referendum on AV is Labour policy, and further devolution for Wales is a positive step. The coalition should also be praised for “abolishing identity cards, reducing detention without trial and having an independent inquiry into allegations of torture.” But these are hardly issues of concern to most voters.

It is on the economy – voters’ number one issue by a factor of four to one – that Hughes’ claims fall flat. In Southwark, the area Hughes has represented since a bitter by-election victory in 1983 and where I live, the damage to the community could not be clearer:

– 3,267 young people will lose out to the Government’s decision to scrap Education Maintenance Allowances (EMA).

– There are 9,320 disabled people aged 16-64 in Southwark who will be affected by the Government’s arbitrary (and possibly illegal) plans to cut Disability Living Allowance by 20%. Of these 3,490 will be hit by the scrapping of the low rate care payments

– 1,340 housing benefit recipients will lose out due to the Government’s reforms which Hughes says he opposes but is yet to vote against.

– 3,100 families will be affected by the cuts to the childcare element of the working tax credit which will cost families up to £1,300 per year.

– every constituent will face an average bill of £389 from the VAT rise which Simon Hughes supported on June 28th despite saying “I hope that the Chancellor’s hearing the voices that say VAT is not the right tax to change in the Budget next week” just 13 days earlier.

– students living on the campuses in his constituency have already expressed their concerns with his broken promise on tuition fees by occupying his office.

Unlike his boss, Hughes avoided the temptation to blame the cuts on the erroneous claim that Britain was on the brink of a “sovereign debt crisis“. Instead, he parcels blame among “the legacy created by the international economic crisis, the greed of the banks” and rather vaguely “the decisions of the last government” which could mean either the light-touch regulation of the City or Labour’s spending plans – both supported by his party.

But there is an alternative to what Hughes’ government is imposing on his constituents. Hughes makes no attempt to justify the pace or scale of the cuts, which he opposed before he supported. Against this backdrop, the diluted rise in capital gains tax which brings in just £725m in 2011-12 means very little. Meanwhile, the as yet uncosted pledge to raise the tax threshold to £10,000 is a regressive and expensive way of targeting support at the low paid. It’s still early days in the coalition’s five years but as Simon Hughes’ constituents will tell him, his influence does not appear to be adding up to much.