The Treasury today refused to confirm Nick Clegg's announcement in yesterday's Sun - that he would raise the tax threshold to £10,000 - as government policy. 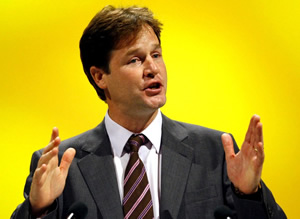 The Treasury today refused to confirm a policy announced by Nick Clegg in yesterday’s Sun – that “no basic rate taxpayer will pay any tax on the first £10,000 they earn” – as government policy, with the press office seemingly unaware of the article.

“Now more than ever, politicians have to be clear who they are standing up for. Be in no doubt, I am clear about who that is. That is why the Liberal Democrats made a promise to voters on the front of our manifesto.

“That no basic rate taxpayer will pay any tax on the first £10,000 they earn.

“We’ve already taken the first steps which will take nearly 900,000 out of paying tax altogether.

“From April, every single taxpayer earning less than £42,500 a year will see their income tax bill cut by £200. By the time of the next election, 23million people will be paying £700 less.”

The same £10k claim was also made on the Today programme earlier this week. The Lib Dem leader said:

“…we are going to put £200 back in the pocket of ever ysingle basic rate taxpayer from April 5th onwards and by the end of this Parliament it will be £700 as we move towards this central pledge of making sure that no one pays any income tax on the first £10,000 they earn.”

Yet a spokesperson for the Treasury told Left Foot Forward: