Ed Jacobs discusses how Christian persecution isn't new and it could be on the rise, looking at attacks on Christianity in Egypt, Nigeria, Iraq and Qatar. 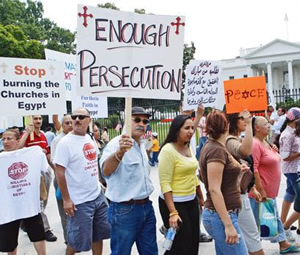 Christianity is the world’s largest faith, with an estimated 2.1 billion followers around the world, or a third of the global population. Of these followers, however, somewhere between 100 and 200 million Christians worldwide face persecution of one form or another.

It is widely believed that Christians face higher levels of persecution than any other religion. Such is the extent of the persecution of those who put their hope and trust in the Christian God that following the New Year’s Eve massacre of 21 Coptic Christians in the Egyptian town of Alexandria the journalist Mark Seddon wrote in The Independent on New Year’s Day that:

“We may be witnessing a new age of Christian persecution.”

Seddon’s words however hide the fact that the persecution of Christians is not a new phenomenon.

It was Herod who as King of Judea ordered the massacre of newborn babies in Bethlehem, feeling, as he did, threatened by the birth of Jesus. And in AD 64, Nero, dubbed a “brutal leader”, launched a systematic persecution of Christians to divert attention from the blame that many attached to him for Rome being destroyed by fire.

And just as the bible itself and history are littered with examples of harrowing persecution, so too, in the 21st century, acts of horrific persecution remain rife around the would.

As mentioned, on New Years Eve, Egypt’s minority Coptic Christian community came under attack when 21 died and 70 were injured following a bomb attack outside a church in Alexandria, filled by almost 1,000 worshippers. In a harrowing account of what he saw, speaking from his hospital bed, 17-year-old Marco Boutros recalled:

“The last thing I heard was a powerful explosion and then my ears went deaf. All I could see were body parts scattered all over – legs and bits of flesh.”

The atrocity was followed by protests by Christians on the streets of Cairo at which one protestor clearly outlined the problem facing Egypt’s Christian minority. He said:

“It’s driving all of Egypt into a volcano. People need to take initiative, people need to wake up, and people need to look out for our rights. We are not a minority. This is our country just as much as it is the Muslims. We have a presence in the country, and we have to be considered, but we are completely placed on the sidelines.”

In Iraq, following waves of violence and attacks on the Christian community, many are now looking to flee the country they call home out of fear that they will be next, targeted simply for the faith that sustains them and gives them hope.

When FIFA awarded Qatar the 2022 World Cup, it effectively gave the country an international seal of approval, a country in which the bible is banned.

In Nigeria, 32 Christians in the city of Jos were killed in a bomb blast and in North Korea, executions of Christians remain rife by a Government simply intolerant of religion and religious assemblies.

Whilst the sheer scale of the death and distribution should itself be enough for governments around the world to stand up for those Christians who find themselves oppressed, the acts of such brutal atrocity should be a priority for policy-makers for three key reasons.

On a purely legal basis, governments have a duty and responsibility to uphold the basic legal rights provided to each and every one of us, with Article 18 of the Universal Declaration of Human Rights making clear:

“Everyone has the right to freedom of thought, conscience and religion; this right includes freedom to change his religion or belief, and freedom, either alone or in community with others and in public or private, to manifest his religion or belief in teaching, practice, worship and observance.”

However, protecting those Christians who face persecution should be much more than simply upholding certain legal rights. It is about allowing freedom of religious belief and practice to be maintained as the core of a civilised society, a case which even the judiciary sees as compelling. In the case of Regina v. Secretary of State for Education and Employment and others (Respondents) ex parte Williamson (Appellant) and others in 2005 for example, Lord Bingham of Cornhill explained:

“Religious and other beliefs and convictions are part of the humanity of every individual. They are an integral part of his personality and individuality. In a civilised society individuals respect each other’s beliefs. This enables them to live in harmony. This is one of the hallmarks of a civilised society.

“Unhappily, all too often this hallmark has been noticeable by its absence. Mutual tolerance has had a chequered history even in recent times. The history of most countries, if not all, has been marred by the evil consequences of religious and other intolerance.”

But standing up for those Christians under constant threat of persecution because of their faith is also about standing up for individuals, individuals whose often sole source of hope, in God and the Gospel, is so cruelly used against them, denied as they are the ability to freely express how they feel.

“Even in the darkest times faith will endure and give us hope.

“Jesus knew exactly the kinds of challenges that people are facing today.

“Times were pretty tough for the people that he lived with. Practical matters of work and money and food were never far from his thoughts and indeed his actions.

“In every story and every encounter he always brought hope.”

So standing up for Christians who face persecution by those who misunderstand their faith as somehow a threat to their authority or policy goals is more than simply a case of standing up for a law in an international convention. It is about standing up for people’s right to openly pursue the faith that sustains and strengthens them and that gives them hope in what all too often turns out to be a hopeless world.

And as the now retied Archbishop Desmond Tutu warns in his 1984 publication, “Hope and Suffering: Sermons and Speeches”:

50 Responses to “A “new” age of Christian persecution?”