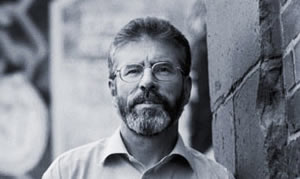 Parties in Northern Ireland face what will be the third by-election to the Commons so far this term after Sinn Fein leader Gerry Adams officially resigned his West Belfast seat to fight the Irish General Election. His move comes following yesterday’s announcement by Taoiseach Brian Cowen that voters in the Republic will go to the polls on March 11th.

In announcing his decision to stand for the Dail in November, Adams made clear his desire to fight what he, and many others believe, are the disastrous economic and financial decisions being taken by the Fianna Fail led Government.

At the time he explained:

“Ireland is at a crossroads. This state is in the midst of a deep economic and social crisis. This Government is probably the most unpopular in the history of the state. It is now implementing bad, deeply damaging policies. It has no mandate whatsoever for this.

“There is a better way. Together we can rebuild Ireland. People need to make a stand against what is happening. We need a better way forward for our country and its people.

“As Leader of Sinn Féin, I want to be part of the necessary fight-back against bad economic policies in both parts of this island and for a fair, decent and united society for all the people of Ireland.”

In December he was selected to fight the seat of County Louth and East Meath. His resignation from Westminster where he, and his Sinn Fein colleagues do not take their seats in protest at having to take an oath of allegiance to the Queen will trigger a third by-election in less than a year, following those in Oldham East and Saddleworth and the forthcoming election for the Barnsley Central seat.

The election could prove the first attempt to offer a more unified unionist voice in Northern Ireland, following Wednesday’s news that the Democratic Unionist Party and the Ulster Unionist Party had agreed to work more closely in both North and West Belfast in the forthcoming local and Assembly elections in May.

In a joint statement, the two parties explained:

“Unionist co-operation is not so much about voting pacts and electoral arrangements; rather, it is about Unionist elected representatives committing themselves to engaging and working together, in continuing partnership with the community, in order to ensure co-operation takes place in a real and meaningful way.

“This is by no means short term in nature. It will involve developing long-term strategic positions in relation to social, economic, educational and cultural issues impacting on North and West Belfast communities.”

In last year’s General Election, Adams held the seat with a majority of just over 17,500. A date for the by-election has not yet been set.