A new e-book, entitled ‘Britain’s broken economy – and how to mend it’ is published today; here, contributor Jonathan Rutherford describes the background to it. 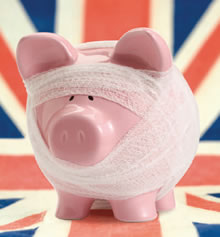 Our guest writer is Jonathan Rutherford, contributor to the new e-book ‘Britain’s broken economy – and how to mend it’; download it here (pdf)

Vince Cable’s rhetoric in his conference speech today serves to highlight the failure of the 1994 generation of Labour leaders to create an alternative to the economic orthodoxies of Thatcherism. Compare his comment that “capitalism takes no prisoners and kills competition where it can” with Tony Blair’s myopic praise of globalisation in his 2005 conference speech or Gordon Brown’s 2007 Mansion House eulogy to a new golden age for the City of London.

The Labour leadership contest has shown few signs of reckoning with this legacy; caution rules. David Miliband gave a very good but under-reported speech in Durham on “the jobs deficit”, and his Keir Hardie lecture set out the moral ground for a revival of Labour politics, while Ed Balls – in what many consider the best speech of the contest – presented the alternative to the coalition’s deficit reduction plans. But three speeches do not make a new political economy.

Whatever Labour’s electoral fortunes, the new leader will need to begin a fundamental process of renewing Labour’s politics. At the centre of which is the need for a new political economy. Labour politics has gone through two revisions in the last 60 years: Crosland’s The Future of Socialism, and New Labour’s ‘third way’. A third is now beginning to take shape, but it’s early days.

To help it along the New Political Economy Network today publishes a short e-book, ‘Britain’s Broken Economy – and how to mend it’ (pdf). We hope it will spark off a debate, not just about policy but a broader discussion about macroeconomics and the nature of British capitalism.

As The Guardian’s economics editor Larry Elliott says in the foreword:

“This e-book is the first attempt at piecing together an alternative to the orthodoxy. It is still very much work in progress.”

11 Responses to “How to mend Britain’s broken economy”