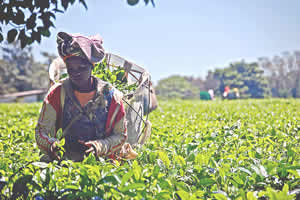 Our guest writer is Lynsey Barber of War on Want

As the prime minister and business leaders prepare for a three-day visit to India this week, Britain’s commercial reputation in the republic faces criticism over workers supplying tea to UK supermarkets for just 7p an hour.

The British famously love their tea, brewing 165 million cups a day – an astonishing 60 billion cups a year. India and Kenya are two of the world’s largest tea producers and exporters, and together produce more than half of the tea drunk in Britain. The UK is the second largest importer of tea, accounting for nearly 10 per cent of world tea imports by volume. The UK buys 16 per cent of India’s exported tea, and 19 per cent of Kenya’s output.

However, little of the profits included in the retail price of a box of tea goes to the tea-producing country. Instead, while multinational corporations reap large rewards, tea workers are condemned to a life of penury. Supermarkets account for over 80 per cent of all tea bought in Britain. Yet a tea picker makes just 1p for each £1.60 box of tea bags sold in a UK supermarket.

The tea industry is a booming global business. With 3.5 million tons of tea produced each year – including 1.6 million tons for export – tea harvesting is an important source of income for millions of workers across the globe. India and Kenya are two of the world’s top four tea-producing nations, earning hundreds of millions of pounds in exports each year. But, despite the massive revenues tea sales generate, workers who pick and pack the leaves face horrendous conditions and earn far below a living wage.

Research published by War on Want today reveals that tea workers in northern India earn just £15.45 (1,220 rupees) a month, compared to a living wage of at least 3,500 rupees (£44.34) a month. The report – A Bitter Cup – also shows tea factory workers in central Kenya supplying British supermarkets toil up to 74 hours a week for a mere £39.52 (5,000 Kenyan shillings) a month – half a living wage. Kenyan tea pickers interviewed were even worse off than factory workers, earning on average only £24.18 (3,060 shillings) a month, far below a living wage.

British supermarkets are signatories to voluntary codes of conduct which are meant to guarantee decent working conditions and a living wage to the workers in their supply chains. But the report shows that tea workers in India and Kenya are systemically denied these basic rights.

Though Indian plantation workers are entitled to a day’s paid leave for every 20 days worked, staff  interviewed for the report were denied this right. Growing use of temporary contracts also means that plantations do not have to give benefits such as medical facilities, maternity leave and food rations. Malnutrition is rife and medical studies have found 60 per cent of children in Indian tea estates are underweight.

Under Indian legislation, plantations are required to ensure benefits for workers, like housing and safe drinking water. But workers’ homes are of extremely poor quality and badly maintained, with no decent sanitation.

Though Indian law also demands plantations must provide educational facilities, they fail to meet this requirement. Parents must instead find money for education fees and children have to walk long distances to school. Most tea workers cannot afford their sons to complete their education and their daughters do not go to school at all.

Kenyan tea pickers work long hours on their feet all day, with heavy baskets on their backs, often in harsh weather. They face exposure to pesticides and insecticides, are prone to injuries or illness, and typically allowed no breaks. Pickers struggle to survive on a single meal a day. Each day they wake up not knowing how far they must walk to find employment or if there is any work. They are hired on a day-to-day basis, without any employee benefits, and missing a day’s work often means they cannot afford to eat that day.

After three months Kenyan tea factory workers are entitled to permanent contracts, with benefits including sick pay, maternity or paternity leave, and paid annual holidays. But factory staff are routinely laid off before this period expires and then rehired, losing these benefits.

Factory workers, entitled to lunch breaks, are generally refused this right, as well as denied masks to prevent inhaling tea dust, and suffer breathing problems and headaches. But they must pay their own healthcare costs as their casual contracts make them ineligible for free treatment. Workers say that injuries result in dismissal and have never heard that any staff received compensation.

Meagre pay forces Kenyan tea employees to live in poor, small houses, with whole families crowded into one room. Only those who live in the factory have access to piped water. All other workers must get their water from a river, where the risk of contamination is high. Most Kenyan tea workers cannot afford to give their children secondary education as the fees of almost £160 (20,000 shillings) a year amount to several months’ wages.

The report is a contribution to War on Want’s campaign for corporate accountability and Unite the Union’s drive for the fair treatment of all workers employed by businesses in supermarkets’ supply chains. It is co-published with Unite and the IUF, the International Union of Food, Agricultural, Hotel, Restaurant, Catering, Tobacco and Allied Workers’ Associations. Shockingly, the conditions exposed have not improved since War on Want’s groundbreaking report into the tea sector in Sri Lanka almost 40 years ago.

War on Want has repeatedly exposed the exploitation and poor treatment of overseas workers supplying UK supermarkets. Similar problems exist with products as diverse as meat, garments, wine and cut flowers. Despite the evident failure of voluntary ethical standards to improve conditions for workers, UK ministers have failed to take action to hold companies to account. The new coalition government must stop this abuse.