Official statistics out today show that crime fell by 43 per cent between 1997 and 2010; the British Crime Survey also shows that crime is down 9% from 10.5m to 9.6m offences in the past year. 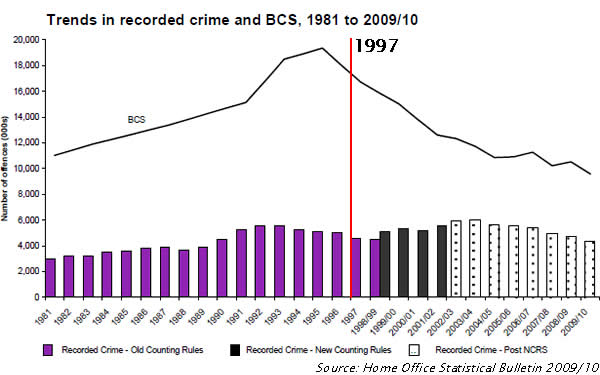 Official statistics out today show that crime fell by 43 per cent between 1997 and 2010. The British Crime Survey reveals that crime is down 9 per cent from 10.5 million to 9.6 million offences in the past year – the lowest figure since 1981 and the first time the number has dropped below the 10 million mark since records began – while police recorded crime fell 8 per cent, down from 4.7 million to 4.3 million crimes.

“But rather than congratulating everyone who has worked so hard to make our country safer, we now have the bizarre spectacle of Tory ministers trashing the official figures which show undeniably that crime has fallen.”

“It is welcome when crime falls but let’s get this into perspective, Britain is a high crime country.”

And home secretary Theresa May said:

“No society should accept a situation where at least 26,000 people a day fall victim to crime – that is why we will reform the police to make them more accountable to their communities and cut bureaucracy to get officers on to the beat and fighting crime.

“This is why we want the public to know what is really going on in their area and will publish monthly crime information about what is happening on their streets by January next year.”