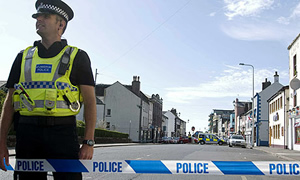 • The major national news story of the past week is the shooting tragedy in Cumbria on Wednesday, when Derrick Bird killed 12 people before turning the gun on himself. The prime minister and home secretary visited the area today, with Mr Cameron describing the mass shooting as an “appalling tragedy“.

Just as in the aftermath of the Hugerford and Dunblane tragedies, there have been calls for a review of gun control legislation, with Theresa May saying the Government would “consider all the options“. One of those calling for tighter legislation is Peter Squires, professor of criminology at the University of Brighton, who explained that “if gun owners weren’t able to store ammunition at home mass shootings would be less likely”, adding:

“If firearm owners were not permitted to store guns and ammunition at home, the incident could not have happened… Keeping guns separate from ammunition would make such incidents preventable – and our communities safer places.”

Left Foot Forward looked at the international evidence on the relationship between gun ownership and gun homicides, which shows a correlation between the percentage of households with firearms and the rate of intentional firearms deaths per 100,000 of population.

• The major international news story of the week is the deaths of up to 19 people following the capture of six ships in a flotilla attempting to breach the blockade of Gaza and deliver aid. The “acts” which led to the deaths were condemned by the United Nations, with the Security Council calling for a “prompt, impartial, credible and transparent” investigation into the incident.

The British Government condemned the actions, with the prime minister calling them “unacceptable”, and calling for the blockade to be lifted, “allowing full access for humanitarian aid”. It was a call echoed today by Tony Blair in an interview with The Independent this morning, in which he called the blockade of Gaza “counterproductive”.

The Israeli Government, however, has continued to defend itself, with Benjamin Netanyahu’s spokesman Mark Regev today insisting his country “holds itself to the highest international standards”; he said:

“It is our standard practice that after all military operations – and especially operations where there have been fatalities – that we conduct a thorough, professional, independent investigation.“

• The Labour leadership contest continued this week, with Andy Burnham, Diane Abbott and John McDonnell all striving to get enough nominations to make the ballot paper and take their places alongside David and Ed Miliband and Ed Balls.

As Left Foot Forward showed yesterday, it is still possible for all six candidates to receive the required number of nominations, and with Next Left, Labour List, Compass calling for MPs to ‘donate’ their nominations to those struggling to make the cut rather than nominating the frontrunners – and even David Miliband himself saying he would nominate someone else – it may yet happen. Nominations close on Wednesday, with the leader unveiled at the Labour Party conference on September 25.

Harriet Harman, leader of the opposition and caretaker leader of the Labour Party, who challenged David Cameron on his regressive marriage tax proposals at the first prime minister’s questions of the new parliament, as reported by Left Foot Forward. She also pledged to reform the rules for shadow cabinet elections so half the posts would go to women, telling today’s Mirror:

“Women in the Parliamentary Labour Party must no longer be in the shadows. I am going to be proposing that when we renew the rules for the shadow cabinet elections that we have 50-50 men and women.”

Her idea has been supported by Ed Miliband, who tweeted he was “very sympathetic” to “what Harriet has said”.

Nigel Farage and fellow UKIP MEP Godfrey Bloom, who this week held a conference at the European Parliament with Russian conspiracy theorist Daniel Estulin and Italian extremist Mario Borghezio to discuss the Bilderberg conspiracy, a conspiracy propagated by hardline right-wingers and libertarians, who accuse it of being a “liberal Zionist plot”. Oklahoma City bomber Timothy McVeigh, London nail-bomber David Copeland and Osama Bin Laden have all bought into the conspiracy.

Five years ago, Borghezio, who sits alongside Farage and his colleagues in the ‘Europe of freedom and democracy’ group, was convicted of setting fire to the pallets of some immigrants while they were sleeping under a bridge in Turin.

Our debunking of the grossly misleading Migration Watch briefing that claimed migration to the UK from outside the EU for work had increased by 20 per cent since the introduction of the Points-Based System in 2008 – a patently inaccurate claim. yesterday, Left Foot Forward revealed the true picture:

“The Home Office statistics that Migration Watch cite show that the total number of visas issued through the parts of the Points-Based System that deal with migration for work (Tiers 1 and 2) was 97,280 in 2009 (including dependents).

“This is 15 per cent fewer than the 114,850 visas issued (including dependents) in 2007 through the Work Permit and Highly Skilled Migrant routes that the PBS replaced. This downward trend is continuing – visas (including dependents) granted through Tiers 1 and 2 were down 15 per cent in the first quarter of 2010 compared to the first quarter of 2009.”

As ever, the Mail printed Migration Watch’s propaganda alomost verbatim, without bothering to check for themselves.

The last candidate to declare for the Labour leadership, Jim Garner, Member of Parliament for South Luxton and Wetfield, reveals his vision of a fairer future, a future that’s fair, and, well, visionary, because the children are the future, and tomorrow’s children are today’s toddlers:

According to our friends at Tweetminster, it’s been a relatively quiet four-day week on Twitter; the main stories to trend were:

• The #flotilla incident in the Mediterranean Sea;

• The shootings in Cumbria;

• John Prescott’s appearance on Have I Got News For You last night; and

• The Stories which played a smaller role were: David Cameron’s maiden PMQs; the London Mayoral contest; and the Lib Dem deputy leadership elections.

The big story at the start of the week was the resignation of the Coalition Government’s Chief Secretary to the Treasury, following revelations in Saturday morning’s Daily Telegraph. It was also a major talking point on last night’s Question Time. Here is a selection of tweets on the topic:

@don_sharpe: How come #DavidLaws can just pay the money back when others are taken to court?

@Javeriah: Re Parris on Torygraph outing #DavidLaws – remember in 1998 on #Newsnight Parris outed Mandelson. What about *his* privacy? #bbcqt

@J5K: Willets: “We need transparency to see where money is going” – like into #DavidLaws mate’s pocket? #bbcqt

@hayleyconboy: I can’t believe i agree with kelvin mckenzie re #DavidLaws on #bbcqt – do you think his homosexuality was a motive for not declaring?

@john_jameson: I can’t believe that the press are getting bashed over #DavidLaws on #bbcqt. It’s like blaming the police for catching criminals!