Two adverts telling Nick Clegg not to 'sell out' on getting a proportional system appeared in national newspapers today. 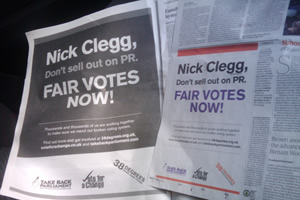 Two adverts telling Nick Clegg not to ‘sell out’ on getting a proportional system appeared in national newspapers today. Supported by 38 Degrees, Vote for a Change and Take Back Parliament, the adverts’ message is very simple: Fair Votes Now. But what makes them so much harder for politicians to ignore is the huge swell of public support which lies behind them.

Thousands of people have been in touch with senior Liberal Democrats over the last four days telling them not to give up on getting a proportional system. Several hundred took part in demonstrations over the weekend with the same demand.

Perhaps most remarkably, today’s adverts were paid for by thousands of small donations from 38 Degrees members, who raised enough money to pay for the ads – including a full page advert in the Times – in just a few hours yesterday evening; so far, nearly £20,000 has been donated – see a running total of donations here.

As talks intensify between the Conservatives and Liberal Democrats, 38 Degrees members will keep up the pressure on the Liberal Democrat leader not to forget his commitment to a fairer voting system. With a huge and growing people-powered movement calling for change, his chances of delivering real reform have never been better.