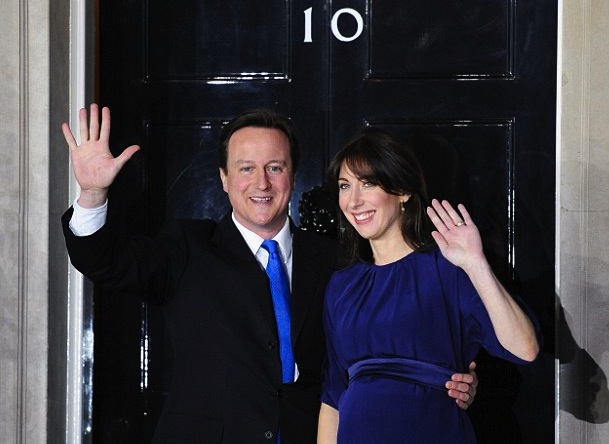 Every paper has a picture of David and Samantha Cameron on the doorstep of Number 10 as the youngest Prime Minister for 198 years forms the first peacetime coalition for 80 years. George Osborne becomes the youngest Chancellor in 120 years and William Hague will be foreign secretary. The Liberal Democrats will have five seats in the Cabinet including Nick Clegg as Deputy Prime Minister. The Times speculates that he, “could also be handed a key Cabinet portfolio alongside his principal title”.

The BBC is reporting that Liam Fox will become defence secretary, Andrew Lansley will run the Department of Health, and Vince Cable will run a business and banking department. David Laws at education, Chris Huhne at environment and climate change, and Danny Alexander at the Scotland Office are the other Liberal Democrats to take places in the Cabinet. No women have yet been appointed. The new Government will start cutting this year and introduce a cap on non-EU immigration – two of the most contentious issues of the election. The two parties will also work on the Lib Dem’s plans to raise the income tax threshold to £10,000. Meanwhile a rise in the threshold of inheritance tax has been dropped and there will be a referendum on the alternative vote electoral system.

Reaction to the prospects of the new government succeeding is mixed. In the Guardian, Simon Jenkins says, “Cameron faces the toughest hand of cards ever dealt a new prime minister”. He also reveals that a deal between David Cameron and Nick Clegg was almost signed last weekend but “Clegg was stopped in his tracks by elder statesmen such as Lord Ashdown and Lord Steel and by MPs sticking to the Lib Dem tradition of refusing to decide whom to support in power.” Simon Heffer, writing in the Daily Telegraph, says, “the scope for dissent that could bring down a coalition is unlimited.” In the same paper, Conservative Home editor Tim Montgomerie criticises the Tory leader’s failure to gain “his own stable majority.” He goes on to say “The team around Cameron failed to decide on a big theme for the election, choosing to run a presidential campaign based around his personality.” Danny Finkelstein in The Times offers an alternative perspective since, “The anti-Conservative majority is, in an extraordinary political coup, no longer an anti-Conservative majority.”

In the the Independent, Steve Richards writes, “For the Liberal Democrats there are opportunities and enormous risks … there will be pain to come, in terms of deep unease within the party about their new alliance and also about the longer-term political implications.” The same paper reports that, “staunch [Lib Dem] opponents said they would abstain rather than vote against the pact as it was the only workable agreement. However, several senior figures said they would refuse to work in the coalition.”

Tributes for Gordon Brown made #ThankyouGordon a trending topic on twitter yesterday evening. A summary is captured on Left Foot Forward while Roy Hattersley is among commentators who pay tribute to the former Prime Minister. Meanwhile, David Miliband has emerged as the front runner for Labour leader with Alan Johnson’s endorsement of his candidacy. Harriet Harman, who takes over as deputy leader, has ruled herself out. Speculation continues over who else will enter the race with Ed Balls, Ed Miliband, and Jon Cruddas. Andy Burnham and Yvette Cooper are also in the frame.

The Daily Telegraph reports that President Obama was one of the first foreign leaders to congratulate the new Prime Minister. He is reported to have reaffirmed the special relationship. A White House statement said: “Today, I was pleased to call David Cameron to extend my personal congratulations for the successful campaign that he ran and for becoming the new British prime minister.” In The Times, Ben Macinture writes that, “The special relationship has become progressively more ordinary in recent years; under a new British prime minister there is an opportunity for it to become more straightforward, more honest and, with luck and good judgment, more useful and pragmatic.”