The new Chancellor of the Exchequer, George Osborne, received a letter from the Governor of the Bank of England today, explaining the latest rise in inflation. 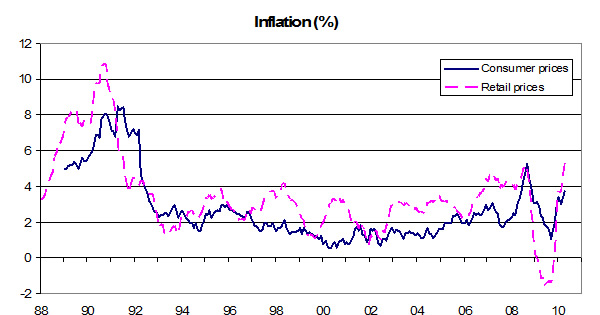 The new Chancellor of the Exchequer, George Osborne, received a letter from the Governor of the Bank of England Mervyn King today, explaining the latest rise in inflation. Official figures from the Office for National Statistics (ONS) show consumer price inflation increased to 3.7 per cent in April, while retail price inflation rose to 5.3 per cent, its highest rate since July 1991. Consumer price inflation has now been 1 percentage point or more above its target rate of 2 per cent for four consecutive months.

The Governor was able to point to some special factors that have boosted inflation in the UK, including the increase in the standard rate of VAT from 15 per cent to 17.5 per cent in January, record petrol prices and the lingering effects of sterling’s 25 per cent depreciation in 2007-08 (though the last should have just about worked through the system by now).

He also reiterated the Bank’s view, expressed in last week’s Inflation Report, that inflation will fall sharply in the second half of the year. But it is an uncomfortable fact that prices in the UK have been increasing far more rapidly than the Bank, or indeed most other forecasters, expected.

This is important for three reasons.

First, the Chancellor’s plans to make savings of £6 billion in public spending in the current financial year are predicated on the assumption that monetary policy can remain extremely loose well into 2011. If the Monetary Policy Committee thinks inflation expectations are increasing, as a result of high recorded inflation, they may have to rethink the timing of the first moves to reduce quantitative easing or increase interest rates.

If so, the economy could face a simultaneous monetary and fiscal policy squeeze at a time when the recovery remains very fragile.

Second, wage inflation is very low, so high price inflation means real wages are contracting. Unless households are prepared to save less or borrow more – and the Conservatives believe that the opposite is desirable – consumer spending will grow very little, and could contract, in coming quarters.

As a consequence, the economic recovery could fail to pick up momentum and may be at risk of stalling.

Third, Mr Osborne may be contemplating an increase in VAT and/or in other indirect taxes in his ‘emergency Budget’ on June 22. To do so while inflation is already at uncomfortably high levels would be to increase the risk of weaker growth in the short-term and of higher inflation expectations in the medium-term.

Not a good first move as Chancellor.

It is, perhaps, natural for a new Government to want to be seen to be putting its own stamp on economic policy as soon as possible – but the economic situation in the UK is very delicate and argues for extreme caution in coming months; the less that is in the emergency Budget, the better.

Thanks for the comments. The headline should, of course, have read “fiscal policies”. A monetary (sorry, momentary) lapse.