The coalition agreement, the Labour leadership race, the British Airways strikes and more. 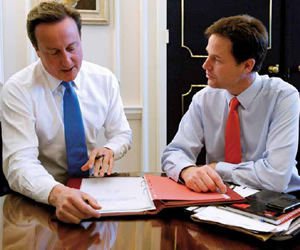 • The new coalition unveiled its “programme for government” yesterday, under the strapline “freedom, fairness, responsibility”. David Cameron and Nick Clegg’s foreword to the agreement described it as “an historic document in British politics”, and called the Lib-Con partership a “progressive coalition” that believed it could deliver a “radical, reforming government, a stronger society, a smaller state, and power and responsibility in the hands of every citizen”.

Left Foot Forward’s team of experts has assessed the coalition’s policies, comparing them to manifesto committments and examining how progressive they are. The policy areas we have looked at are:

In the next few days, we will have more analysis of the agreement, including looking at the coalition’s policies on the regions, on broadband and international development.

• The number of confirmed runners in the Labour leadership campaign rose to six – up from just one a week ago. Joining David Miliband in the field are his brother Ed, fellow former Cabinet ministers Ed Balls and Andy Burnham, and left-wingers John McDonnell and Diane Abbott – the latter’s candidacy a bolt from the blue, shocking Westminster and at the same time drawing praise from all wings of the Labour movement after a general election, three TV debates and coalition negotiations dominated by men.

Writing in today’s Guardian, she said that “many people believe that we need the broadest range of candidates in the race. Otherwise, many issues that Labour party members (and the public) want to debate will be off the table”, while on immigration she says:

“My rivals are all wringing their hands about immigration. They seem to think (wrongly) that it lost us the election. But I have done more immigration casework than all my rivals put together. On the one hand, I know about the continuing inefficiencies and delays in the system that breed abuse.

“But I also know that we need to face up to the real reasons behind (black and white) working-class unhappiness about immigration. We have to talk about housing, the rise of agency (and casualised) labour and the incremental undermining of the welfare state, which have left working people feeling so insecure.”

• The other main story this week was the British Airways strike dispute, which was ruled illegal by the High Court on Monday, a verdict which was then overturned on appeal on Thursday. A five-day cabin crew strike is now due to begin this Monday, with further five-day strikes pencilled in for May 30 and June 5 – though BA may take the case to the Supreme Court to reinstate the injunction.

In another blow to the airline, it was reported today that the national flag carrier suffered record losses of £531 million in the 12 months to March, its biggest loss since the company’s privatisation in 1987. Chief executive Willie Walsh said:

For the union, Unite joint general secretaries Tony Woodley and Derek Simpson ramped up the pressure on Walsh, saying he had just three days and counting to “seize the possibility for industrial peace”.

The Labour Party, which this week listened to concerns from party members, MPs and even leadership contenders themsleves and extended the period until nominations close, and extended the legth of the contest itself. On Saturday, Left Foot Forward had called for precisely this course of action. Jon Cruddas was among MPs expressing their concern with the initial nominating period.

Soon to be ex-Leicester City footballer Wayne Brown, who boasted to his teammates that he had voted BNP in the election. He stunned his colleagues, including black, Asian and mixed race players, launching into an abusive attack against ethnic minorites, whom he claimed were “killing this country”. It is difficult to comprehend how such an individual can find himself playing professional football in this country in this day and age, nor what future he could have in the game.

Two bodies of evidence on poverty and inequality in the UK, which show that poverty has fallen recently, and that, were it not for the Labour government’s policies during their 13 years in office, inequality would have been higher than it is now.

On inequality, the Institute for Fiscal Studies released a report this morning which concluded that Gordon Brown had “mitigated” the rise in income inequality; although inequality was now at its second highest level ever – it would have been “even higher without changes to the tax and benefit system since 1996-97,” according to IFS senior research economist Ali Muriel.

According to our friends at Tweetminster, it’s been a very quiet week out there in the Twitterverse; the only stories to significantly trend were:

• The confirmation of John Bercow as speaker; and

• The various Labour leadership candidacies – Diane Abbott’s being the most surprising.

Here are some of the latest tweets on the Labour leadership race:

@theday2day: Strengthening our internal Democracy should be one of the central, most pressing issues in the #LabourLeadership contest..

@BenCooper86: Question: Which of the 6 #LabourLeadership candidates is the most electable, & is it an important factor?

@viclanger: Clowns to the left of me, Jokers to the right – here I am stuck in the middle with WHO? – still not sure what i think re #labourleadership

@paulprentice: The more I think about it, the more I like the idea of Diane Abbott’s name being on the Labour leadership ballot #labourleadership

10 Responses to “Look Left – The Week in Fast Forward”