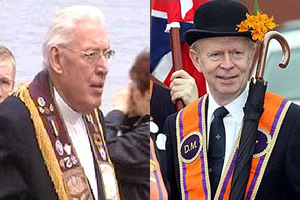 Just a week after Ulster Unionist Party leader Sir Reg Empey announced he would be stepping down with a call for a “fresh approach” to unionism, support for the principle of a single, united unionist party across Northern Ireland seems to be growing. Speaking during the re-opening ceremony of the Lavin Orange Hall in county Antrim, following an arson attack on the building, the head of the unionist Orange Order called for the UUP and DUP to unite.

In his speech, Robert Saulters, Grand Master of the Grand Orange Lodge of Ireland said:

“There is a huge groundswell of opinion that there must be a drive towards unionist unity or at the very least better joined up thinking between unionists. The one phrase which seems to really upset our enemies is unionist unity. They are unable to cope with the prospect and we should take note of that.

“Personally I believe there should be one big unionist party which represents all the views that I here. It must be a party that is big enough and modern enough to allow people with conflicting opinions to work together for the common purpose of maintaining the union.”

His comments come after news emerged in January that the Orange Order had secretly convened talks between the unionist parties on a possible merger, talks which included the UUP leader and his Democratic Unionist Party counterpart Peter Robinson.

Reacting to the speech, UUP MLA for Strangford, David McNarry – touted as a potential replacement for Sir Reg as leader – said:

“I think the Orange Institution has a major role within the Orange family and is respected for staying out of party politics. I think that his speech will be a significant contribution to the ongoing debate. I’m sure his aspiration of there being, one day, a single unionist party will resonate with a lot of people.

“However, I think it’s a bit premature in that there is a lot of work to do in bringing together a united unionist coalition, something I have been calling for for a long time.”

Equally positively, Arlene Foster, the DUP enterprise minister who following her period as acting first minister will be seen as a potential future leader of the party, was equally positive about Saulters’s remarks:

“The election result demonstrated that those at Westminster and the NI Assembly could have greater representation through more unity. We believe that unionism is weakened when it is divided.”

Not everyone in the unionist community is so easy about the idea of a united party. In an editorial just days after the general election, the broadly pro-unionist Belfast Telegraph concluded:

“The changed political landscape in Northern Ireland, post the Belfast and St Andrews agreements which demonstrated the desire of the population to see a diversity of political opinion in the governance of the province, provides a compelling argument for greater plurality in political representation rather than less, as would be the case in the creation of a new unionist monolith.”

3 Responses to “Is unionist unity possible?”