All the available evidence of where Tory-style plans have been implemented shows minimal take-up rates where voluntary systems have been introduced. 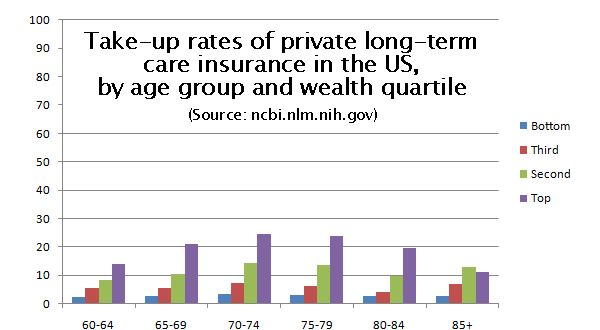 Today’s Conservative manifesto contains more details of the party’s approach to social care. The evidence suggests that the poor will be hit hardest by their voluntary approach.

“We want to create a system which is based on choice and which rewards the hundreds of thousands of people who care for an elderly relative full-time. So we will allow anyone to protect their home from being sold to fund residential care costs by paying a one-off insurance premium that is entirely voluntary. Independent experts suggest this should cost around £8,000.”

But all the available evidence of where Tory-style plans have been implemented shows minimal take-up rates where voluntary systems have been introduced. As page 129 of the National Care Service white paper points out:

“Low levels of take-up would mean that the risks of catastrophic care costs would not be shared across everyone, and this would be likely to increase the cost of premiums. This could make voluntary insurance unaffordable for some people.”

That would leave 90 per cent of people – including many of those on lower incomes – uninsured. When broken down along income lines (see graph below and report) the lack of coverage is even more marked: just 2.8 per cent of the poorest quartile have private long-term health insurance coverage, and only 6 per cent of those in the third quartile, those aged 80 or over suffering worst.

The Tories are fond of citing anonymous “experts” in support of their assertions but a number of named “experts” have previously spoken out against the Tories’ social care plans, which were first published in their draft health manifesto. Not one of the charities supporting people with disabilities and care needs, or representing carers and care providers came out in support of the Conservatives’ voluntary insurance plan, with all of them concerned that funding would be insufficient.

“Debates about “death taxes” have completely overshadowed the needs of working age adults with disabilities including those with autism. It is about time Parliament recognised that the social care debate is not just about older people. It must be acknowledged that people with serious, lifelong and disabling conditions may be less able to save and pay for their social care.”

“The government has set out a bold and ambitious plan for reform which if realised would establish a National Care Service free at the point of need. Defining a national entitlement would mean that people receive help based on their needs, not their postcode – a major achievement that would tackle the perceived unfairness of the current social care system.”

And Ruth Scott, director of policy and campaigns at disability charity Scope, said:

“The proposal that working-age disabled people will have to pay for social care unless they are on a low income is fundamentally unfair and likely to exacerbate already high levels of poverty and exclusion.”