A Conservative Party candidate who described homosexuality as "not 'normal' behaviour" and defended section 28 has pulled the remarks from his website. 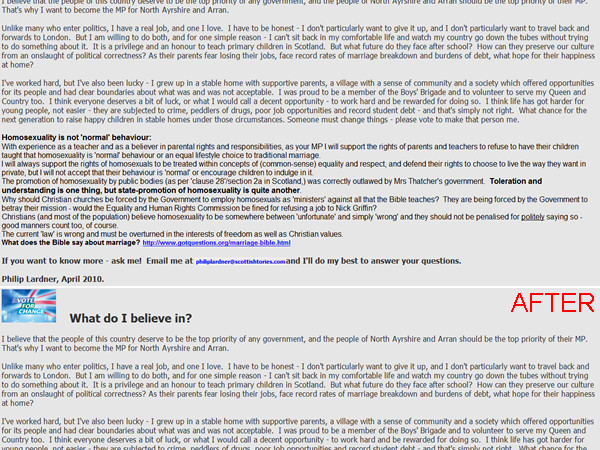 UPDATE 15:26hrs: Laura Kuenssberg, on News 24, has just revealed Lardner has been suspended from the Tory party and will now not contest the seat at the general election. It is too late for the Conservatives to field another candidate.

A Conservative Party candidate who said Enoch Powell “was right” and described Ian Smith as his “hero” has exhibited his exremist views once more by describing homosexuality as “not ‘normal’ behaviour” and defending section 28 –  remarks which have now been removed from his website, but not before Left Foot Forward got a screengrab (click to enlarge):

“As your MP I will support the rights of parents and teachers to refuse to have their children taught that homosexuality is ‘normal’ behaviour or an equal lifestyle choice to traditional marriage… I will not accept that their behaviour is ‘normal’ or encourage children to indulge in it.

“The promotion of homosexuality by public bodies (as per ‘clause 28’/section 2a in Scotland,) was correctly outlawed by Mrs Thatcher’s government.“

Lardner’s remarks are yet another indication of the forces of homophobia at play in David Cameron’s modern Conservative Party, following shadow home secretary Chris Grayling’s remarks that B&B owners should be allowed to refuse entry to gay couples and shadow defence minister Julian Lewis’s comments on the age of consent and HIV. Grayling and Lewis remain Conservative candidates and remain on Cameron’s front bench.

Cameron’s allies in Europe are even more homophobic than his own MPs. In 2000, Michal Kaminski, leader of Cameron’s MEPs, gave a TV interview in which he refers to homosexuals as “pedaly”, literally pedals which is the near equivalent of “faggots” but also implies paedophilia. Kaminski has never apologised for the remarks and has never been criticised by Cameron for them.

Only last November, Cameron’s Lithuanian partner, Valdemar Tomasevski, described homosexuality as an “evil” from which children should be protected and says “we cannot allow these people to claim … that homosexuality is normal”. Cameron has never condemned Tomasevski, who remains a key ally.

UPDATE II 15:51hrs: The Conservative Party has just released a statement condemning Mr Lardner, saying his views have no place in the modern Conservative Party. As mentioned above, he has been suspended form the party and will no longer stand as a candidate.

“Thanks to our quisling politicians, we are now required to self-loathe our history and culture, indulge in degenerate pop and soap culture and celebrate the destruction of the family by prancing about at homosexual roadshows. These politicians have ensured we capitulate by destroying our industry and economy and immersing us in a Euro-superstate.

“With no job, no (man-woman-children) family and no hope, are we surprised that kids and adults in sink-estates have no aspiration? Our politicians have destroyed our country and left our indigenous ordinary people a hopeless and directionless mess.

“Quite literally I ask, God and Jesus help us!”

And last May, he appeared alongside Murdo Fraser MSP, deputy leader of the Scottish Conservatives, at a meeting of right-wing Freedom Association.

Questions will be raised about how a bigot like Lardner rose so high in the Scottish Conservative Party, in the wake of his remarks about “homosexual roadshows” and his past comments about Ian Smith: “Ian Smith typified a British hero… I met him in 1998 and got to shake his hand. I am confident Ian Smith was a good man”; immigration: “It doesn’t make sense to flood a small island with people” and Enoch Powell: “Essentially, what Enoch Powell said has in a small way come true.”