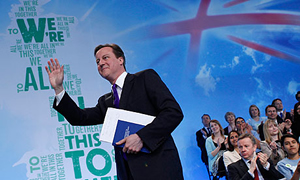 • The resignation of a member of the Tories’ youth wing, Conservative Future, after claims she was bullied for being from the north of England and going to a state school. She also claimed that “a Tory PPC called me a P***-shagger when I was seeing a man of Asian origin”.

• The Tory leaflet, reported by Left Foot Forward, which showed a machete drenched in blood and the false, scaremongering statement that violent crime is “up 44% under Labour”. The true figure is a 41% fall since 1997.

• Chris Grayling’s secret remarks to a group of right-wingers in which he said bigoted B&B owners should be allowed to discriminate against gay couples – he remains the Conservative Party’s shadow home secretary.

The pamphlet, “Blue dawn fades: Why the Conservatives missed their progressive moment”, looks at how Mr Cameron developed themes of social justice, environmentalism, localism and community, with the laudable aim of developing a positive vision of the “good society”, yet failed to take the party with him.

“It would be wrong to dismiss New Conservatism as shallow salesmanship or pure positioning; the philosophy of Compassionate Conservatism parts with some of the worst excesses of Thatcherism. It acknowledges the existence and importance of society, the need for state provision of some social goods, and that human beings can be generous and inquisitive as well as selfish…

“David Cameron was taking his party in an interesting direction but when the economic crisis came, he turned back. The New Conservatives may have finally understood the scale of the social and environmental challenges we face, but their reliance on free market solutions means they lack the tools to face the challenges…

“To achieve the good society and tackle Britain’s social recession, we need an active, interventionist state and tighter regulation of markets. Cameron has shown little appetite to implement any of these things… The pressing task for the future and the major downfall of Cameron’s Conservatives is that they have no plan for an ethical, sustainable economy able to foster equality and social justice.

“If a compassionate Britain will not be created by New Conservatism then it will have to be the responsibility of another political project. The Tories do not deserve to win the next election because they have not yet successfully transformed themselves into a party that will make Britain better. But Labour will lose an election one day – and who they then lose to matters.”

8 Responses to ““Same old Tories” have missed their progressive moment”