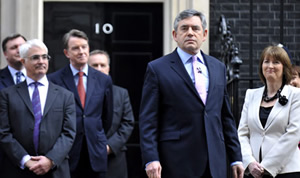 • Gordon Brown confirmed the worst kept secret in politics this Tuesday, that the election will be held on May 6th. He made the announcement flanked by his cabinet, described by The Guardian as “personal, proud, defiant”. It was a deliberate display of unity and strength, in contrast, perhaps, to David Cameron’s one-man band. Mr Brown said: “I am not a team of one … I come from an ordinary middle-class family in an ordinary town and I know where I come from, and I will never forget the values – doing the right thing, doing your duty, taking responsibility, working hard – that my parents instilled in me.”

In response, the leader of the opposition said: “It’s the most important general election for a generation. It comes down to this. You don’t have to put up with another five years of Gordon Brown … Let’s get off this road to ruin and instead get on the path to prosperity and progress,” while Liberal Democrat leader Nick Clegg proclaimed it “the beginning of the end of Gordon Brown”.

• The main policy difference of the campaign has been the row over national insurance, which continues to rumble on. Left Foot Forward has today taken apart the Tory claims on the issue, explaining the irresponsibility of describing the small rise in NI contributions as “a tax on jobs that will kill/wreck/ruin the recovery”. Our economics correspondent Varun Chandra wrote that “singling out NI as distinct from other taxes in this respect is nothing more than an attempt to trick us into an uneducated, emotive response,” adding:

“The electorate is not stupid. We know that there is pain to come. We are starting to appreciate that the government is not trying its best to throw our money away, but equally have doubts as to their ability to spend effectively while controlling the budget given our recent negative experience. But we should also be deeply concerned that the opposition, with power almost in their grasp, are saying things that simply don’t make sense in the hope we won’t notice. Tory economic policy is incoherent. And they are treating us like fools.”

In a further blow to shadow Chancellor George Osborne, one of the businessmen the Tories claimed to be on their side, Dragons Den star James Caan, not only cheered Gordon Brown enthusiastically at a Labour Party event last night, but also said Labour’s National Insurance rise would only add £15 to the cost of employing someone, and that wouldn’t realistically be enough to put him off filling a vacancy that needed filling.

• The other main clash has been over political and parliamentary reform, with the prime minister promising referendums on both a proportional voting system for the Commons and a fully elected House of Lords (heard that one before!?). He said that MPs would be forced to seek approval before taking a second job and would be banned from working for lobbying companies. He also offered 16-year-olds the prospect of the vote and committed Labour to fixed-term Parliaments – probably of four years – while pointing out that the Tories were opposed to both an elected upper chamber and the alternative vote (AV) system.

Willie Sullivan, campaigner director of Vote For A Change, writing on Left Foot Forward, described the Tory opposition to a referendum as choosing a “scorched earth policy rather than trust in their arguments on first-past-the-post (FPTP) or in the judgment of the British people”.

Liberal Democrat leader Nick Clegg, who told the Today programme on Wednesday that the Trident nuclear missile system should be replaced with the Astute class submarine – the only main party leader to do so; he said: “All we are saying is that you shouldn’t rule in the option which we think is neither affordable nor strategically necessary which is the like-for-like replacement of Trident.”

David Cameron’s shadow home secretary Chris Grayling, who was secretly recorded saying B&B owners should have the right to bar gay couples. Having gone into hiding, he re-emerged to make wild accusations about drugs and reoffending.

Responding to the announcement of the election on Tuesday, Mr Cameron had only said he was for “young or old, rich or poor, black or white” but not “gay or straight”…

Nicola Smith and Richard Excell’s rebuttal of the claim by the Express, Mail and Spectator that nearly all new jobs created since 1997 have gone to migrant workers. The true figures, available from the Office for National Statistics, show that 50.3 per cent of the jobs created since 1997 have been taken by UK nationals (around 1,375,000 positions), and that employment rates for UK nationals remain at the same level they were in 1997 – despite the sharpest global downturn since the 1920s.

Fraser Nelson, author of the original piece in The Spectator – in his haste to appease his audience – came up with the misleading claims by conflating “non-UK born” with “nationality”, excluding UK workers over state pension age and excluding UK citizens who were born outside of the UK. He corrected his own numbers down from 98 per cent to 78 per cent and again to 72 per cent, with non-UK born UK citizens still excluded. His wider analysis still excludes public sector jobs.

This week, Conor imagines waking up in the 1980s, has the inside scoop on what really went down between the Queen and prime minister and asks why on Earth the good people of Stoke would ever vote for Gary “MI6 set up the Falklands war … The Conservative party are aparty [sic] of traitors … The Tories funded Hitlers rising Nazi party … Hess, Speer and hundreds of Nazi’s colluded with the Tories to accept a Nazi Britain … The only Tory is a dead Tory that I am present at the burial” Elsby (H/T: Tory Bear)…

According to our friends at Tweetminster, this week’s top political story is, surprise surprise, the election being called, even though as a story itslef it only trended on day one. Since then there have been between 2,500-7,000 tweets per day specific to the national campaign.

In terms of specific issues and stories, the following witnessed the greatest traction:

3. Stuart MacLennan’s sacking as Labour PPC for Moray; and

Another big story was the national insurance row, which was much debated on Twitter.

Yesterday, at the Royal Institution in Mayfair, Gordon Brown held the first in a series of interactive events in which the prime minister and members of the cabinet take questions from the audience and via Twitter and Facebook. Here are some of the best tweets from last night’s event:

@johnringer: The Faraday Theatre, where today’s #GBontheroad was, is where Oliver Lodge demoed Hertz’ theories. Lodge was also a big Fabian! Coincidence?

@foluke: …reminded the audience about the entrepreneurial passion of young people & managed to sneak in some dance advice for GB #GBontheroad.

@sam_elliot: James Caan was at #GBontheroad earlier. Tories clearly not checking their backyard.

@AndyTaylor78: went to see #GBontheroad tonight, GB won over audience of economists and business people, with knowledge and clarity Tories just don’t have.

@charliewhelan: RT @lucymanning: #GBontheroad a pensioner happy with NI increase as she doesnt have to pay it.

4 Responses to “Look Left – The Week in Fast Forward”