David Cameron’s “Big Society” is in democratic deficit. It is merely a back-door way of allowing the wealthy and educated to clean up at the expense of the poor. 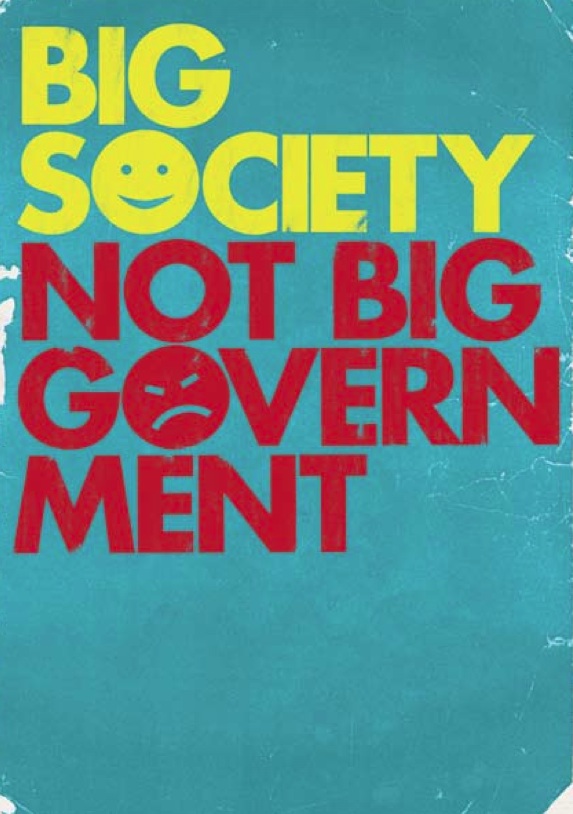 Our guest writer is Sadie Smith

Saying that you are sceptical about the merits of devolving power to the people is taking a potshot at a holy cow of received political wisdom, that people are desperate to have more control over their local services. However, Cameron’s “Big Society” manifesto launch, far from striking a blow for the autonomy and choice agenda, is merely a back-door way of allowing the wealthy and educated to clean up at the expense of those of a lower social class and educational attainment.

To be fair, in theory, it all sounds so good. What is wrong, after all, with parents deciding that local schools are inadequate and starting their own? What is the problem with recognising that the state can be an inefficient provider of key services and choosing to have them administered by the voluntary sector instead? Well, there’s nothing wrong with these noble, empowering, sentiments as long as you have the people power to make them happen. The last thing any Government wants is to find that, having stormed the citadel of the Big State to many voices raised in joy, the same individuals cheering on liberation a few hours previously are moaning about having to clear up the rubble the next morning.

Cameron’s “Big Society” requires an engaged citizenry raring to take over the responsibilities of an outdated state bureaucracy. So how many people actually want to get involved in activism in their local communities? According to Cameron and the Conservatives the answer is, “Like, LOADS dude! Chuh, everyone hates politicians and community, grass roots activism is totally so Barack Obama. Facebook! Yeah!”

The actual answer, according to the Hansard Society’s Audit of Political Engagement 2009, which focused on political participation and citizenship, was “not that many, as it happens.” The independent study found that half the public do not want to be involved in decision making in their local area and over half (55 percent) do not want to be involved at a national level. Nearly half (40 percent) cite “lack of time” for not getting involved, and none of the other reasons receive a mention from more 12 percent of respondents.

The statistic that shoots a massive hole in the hull of Cameron’s manifesto on “hopey, changey stuff” is the one that deals with voting. Whilst 87 percent of those questioned thought it was “essential” or “important” to vote, only 53 percent said that they would be absolutely certain to do so. The Hansard Society comments that, “While the public has a clear view about the theory of being a good citizen – for example voting and making charitable donations – they do not actually make the leap from good intentions to positive action.”

Furthermore, the Audit found that social class was fundamental to engagement. ABs engaged more than DEs, frequently by a margin of 15 – 20 percentage points. In addition, university graduates were more likely to display higher levels of participation than their counterparts with few or no qualifications, as well as those who read a quality as opposed to popular newspaper. Unhappily for the Tory leader, this means that the saliva Cameron expended kissing Murdoch’s butt for that all-important Sun endorsement last autumn is going to deliver him very little in terms of votes and active citizens, according to the Audit’s analysis. More seriously, the demographic of – say – Sun readers without a university education and not of the AB social class are going to be the most ill-represented by Cameron’s “Big Society” proposals, in spite of the winsome page 3 stunna’s attempts to assure them otherwise.

It’s at times like this we need to ask the question: have the political class learned nothing from Foundation Hospitals? Responding to an apparent demand in the electorate to provide health care responsive to the needs of local people, the Government introduced the Foundation Hospital scheme which allows the population to vote on who sits on the hospital board according to what their healthcare priorities are. In line with the Audit’s findings, nobody really votes, much less stands for office, in these elections. Guys and St Thomas’ hospital has a potential constituency of over a million voters, but the number who actually take part can be counted in their hundreds. So hospitals now determine their priorities based on those belonging to the minority of the super-engaged and hospital staff, because most people simply do not have the time, knowledge, or technical tools that Cameron’s “Big Society” narrative assumes that everyone is in possession of.

The other downside for the Tories in the long term, and also a lesson from the Foundation Hospital debacle, is that the “Big Society” and “new localism” swiftly becomes a “postcode lottery” when an outraged mother unable to get her kid into her preferred school is interviewed by John Humphrys with the gleam of battle in his eye.

So, in an embarrassing turn of events it transpires that Dave’s “Big Society” idea is in democratic deficit before it’s even begun. Either that, or it’s merely a cunning front to empower the already powerful at the expense of those the traditional state apparatus, however imperfect, strives to protect.

27 Responses to “Cameron’s “Big Society” is in democratic deficit”