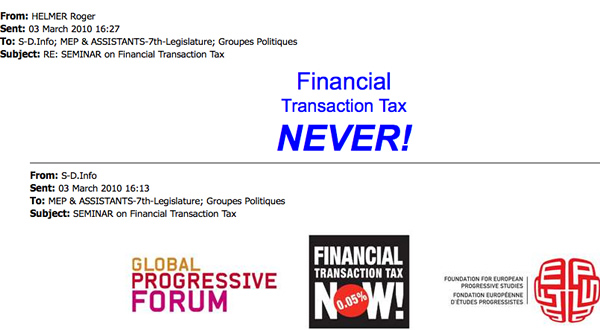 Tory MEP Roger Helmer has inadvertently publicised a seminar titled “Fighting for a financial transaction tax” – replying all to the invite that was sent to most of the European Parliament, ensuring all MEPs and researchers were reminded of the event.

In 36-point text, italicised, bold and IN CAPITALS, Helmer screamed:

It is not the first time an email espousing a hard-right cause has gone out in the name of a Tory MEP to the whole of the European Parliament. In December, Left Foot Forward revealed an email from Nirj Deva’s account was sent to all MEPs and researchers containing a propaganda video which claimed:

“There is no such thing as man-made global warming.”