The Conservative party's 'Cash Gordon' campaign was backfiring badly this morning. Hundreds of tweets denigrating the Tories appeared on their home page. 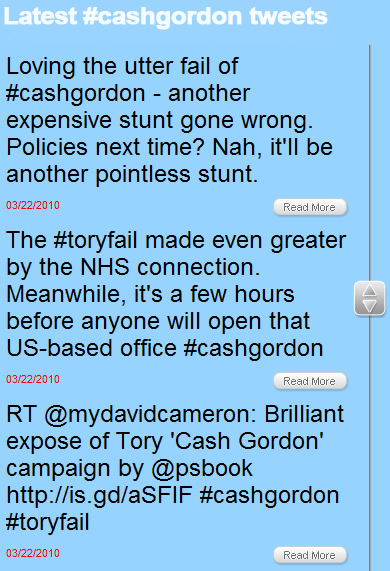 On the back of Political Scrapbook‘s story, the Cash Gordon website has been taken down after being hacked, as explained by Dizzy Thinks:

“Basically, the Tories latest ‘Cash Gordon’ website mentioned in the previous post is offline (at the time of writing). The reason is because the developers who were paid to create it didn’t, it seems, protect against code injection. The Twitter feed was scrolling as people used the hashtag #cashgordon. The problem was that by inserting javascript into the Tweet comment it was possible to browser hijack people and redirect them elsewhere…

“People began to do it spades and it’s been taken offline and word is that it’s being fixed currently.”

The Conservative party’s ‘Cash Gordon‘ campaign was backfiring badly this morning as hundreds of tweets denigrating the latest Tory online campaign appeared on their home page. Earlier today, Political Scrapbook exposed how the social action website was put together by the same time which tried to scupper US healthcare reform.

The hashtag #CashGordon, which had been set up to mobilise Conservative opposition to Unite’s funding of the Labour party, is now being used to embarrass the web team behind the latest Tory campaign. Tweets include:

• @SamHowroyd: The Tory #cashgordon fuck up has made my day.

• @Chris_Manch: Connect with the Tories and tell them what you think, directly on their website. http://cash-gordon.com #cashgordon

• @jennie_kermode: Proof, if we needed it, that the Tories haven’t the sense to do anything in moderation. #cashgordon #toryfail

• @AndyTannerSmith: is the Cash Gordon site part of an official Tory campaign. If so they should hang their heads in shame #cashgordon #toryfail

Political Scrapbook today exposed how the Tories’ latest campaign was “designed by US anti-healthcare lobbyists”. The story has already been retweeted over 100 times in just 90 minutes. The story outlined that:

Writing on the Blue Blog yesterday, the affable Sam Coates claimed that Conservatives’ campaign site against Labour/Unite links was “built in just a few days”. What he doesn’t tell you is that the system has been purchased off-the-shelf from Republican strategists David All Group and was originally developed to galvanise opposition to Barack Obama’s healthcare reforms.

Cash Gordon is based on Operation Waiting Game, which leverages social media against reforms which, it is claimed, “will have the same devastating effects in the United States as it has in Canada and in nations across Europe: longer wait times and lower quality care”.

Echoing a tweet by Sam Coates of the Conservative party’s new media team, blogger Tory Bear has tried to defend the website by suggesting that the link is tenuous:

“PS uses WordPress. Lots of people he disagrees with use WordPress. He going to cry about that?”

But as Political Scrapbook has made plain:

The arguments about platform (“yeah, but the BNP use WordPress”) would stand up if it weren’t for the fact that the both the tech and political sides are done in-house at David All Group. It’s a political communications consultancy and act.ivi.st is their proprietary platform. Every single one of their staff (bar one) is listed as a Republican operative:
http://www.davidallgroup.com/about