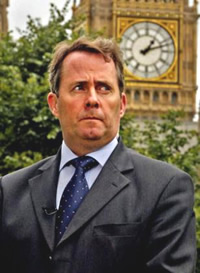 Shadow Defence Secretary Liam Fox has been slated by military chiefs for future Tory defence policy, which he is set to explain in a speech to the Royal United Services Institute today. The key criticism of commanders, reports The Independent, is the Tory plan to transfer all British troops based in Germany back to the UK. Though the cost of housing them in Germany is “marginally more expensive” than at home, “the cost of transferring them all would far outweight this” according to General Sir Mike Jackson, former head of the Army. Former head of the Marines, Major General Julian Thompson, added that it was going to be “very, very expensive in terms of capital costs alone … What one does not want is money which had been earmarked for carrying out much needed improvements on existing accommodation to be spent on new accommodation”. The criticism follows the attacks on Chris Grayling last week over his misuse of statistics and general ignorance about crime.

The expenses scandal continues to drag on, with David Cameron launching a personal attack on Gordon Brown for “tolerating” the attempts by the three Labour MPs indicted for theft to use parliamentary privilege to escape sanction. In a speech on reform at City University today, reports the Telegraph, the Tory leader will accuse the Prime Minister of being a “shameless defender” of the “old order”. He will also announce that the Tories will introduce a new Parliamentary Privileges Act if they win the election, reports The Guardian, “to clarify the rules of parliamentary privilege, to make clear that they cannot be used by MPs to evade justice”. The Times, meanwhile, reports that one of the three accused, Livingston MP Jim Devine, was told by “a whip and other MPs that he could “move money around” between different accounts, a claim he also made in several media interviews over the weekend – most notably on Channel Four News on Friday.

Budget cuts in higher education spending mean up to a third of a students could be left without a place in the next academic year, figures from UCAS out today will reveal. The Telegraph reports that an expected rise in applications of 10-12 per cent, coupled with a fall in the number of places to less than 500,000 will result in students, even those who achieve their entry requirements, being turned away. The University and College Union slammed the Government for “spectacularly failing to understand that massive funding cuts will have a massive impact”. The Guardian and Standard focus on the impact of the cuts on university staff, with up to 15,000 posts facing the chop. Post-grads will replace professors, and staff are planning to go on strike in protest at the cuts, says the Guardian.

The Mirror reports the use of “sickening Nazi language” by a 20-year-old Young Conservative chairman in a newsletter. Writing to young members, David Bolt had said: “We will form a CF Sonderkommando to blitz any areas which battleground prospective parliamentary candidates particularly wish to target, whether that be through canvassing, literature drops or visible, high-impact campaigning.” The Sonderkommando “persecuted Jewish prisoners forced to dispose of concentration camp bodies” explains the report. Though a Tory spokesman said the “offensive terms were wholly unacceptable” it is thought Bolt has not yet been expelled from the party.

And The Guardian reports that the public has “lost faith” in climate science following the leaked emails scandal, with recent surveys showing the number of Britons believing the science down over the past 12 months. The change in attitude since November shows an even sharper decline: it found 25 per cent of adults did not believe in global warming, up eight per cent. The report adds that “allegations about the accuracy of a 2007 report produced by the Intergovernmental Panel on Climate Change (IPCC) – including a claim that global warming could cut north African crop production by 50% by 2020 – could damage public perception further”.