Another day, another nail in the coffin of "compassionate Conservatism" with David Cameron giving one of his most extreme interviews yet - to the Express. 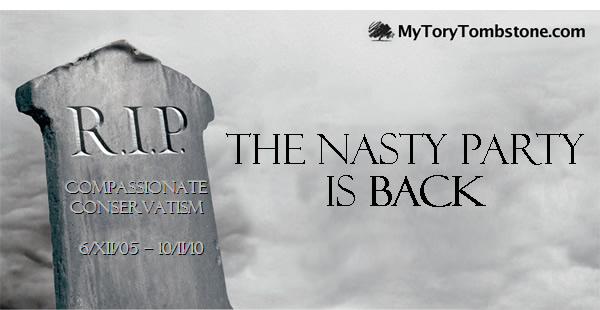 Another day, another nail in the coffin of “compassionate Conservatism” with David Cameron giving one of his most populist interviews yet in a desperate attempt to pander to readers of the Express – yet still, judging by their reaction, failing to win them over.

Under the front page headline “Cameron wake-up call for workshy”, the Tory leader claimed Britain was in a “terrible, shocking state”.

“This is roll up your sleeves time, time to look the British people in the eye, say we’ve got to do some difficult things to get the country back on its feet again.”

He failed, however, to outline any detailed policies on how exactly he plans to do this. Then, in a final bid to rouse the die-hards he paid tribute to Thatcher:

“Look at the evidence of the 1980s. The way we got the rich to pay more taxes is we cut the top rate of tax.”

Gave vigilantism the thumbs up:

“People need to have the certainty that, unless it’s grossly disproportionate, the police and the courts are not going to come anywhere near them.“

And threw in a dose of Euroscepticism for good measure:

“I would never take Britain into the euro – full stop, end of story..”

The respone of the Express’s readers? Not far enough, apparently, many of them obsessed by immigration, one such commenter, without any sense of irony, writing:

“where are the jobs well the immgrents have them..

“so is he going to take the jobs off them and put them on the dole ?.”

It seems nothing less than a bit of “Tea Party” bigotry will do for some.

Mr Cameron must be wondering why he bothered; it seems he’s not nearly Right-wing enough for the Express – in spite of sucking up to them. In so doing he has risked alienating moderate, liberal voters whose values he claims to represent.