Vince Cable set out his economic manifesto today. But he conceded that his party's flagship tax policy was not as radical as other approaches to redistribution. 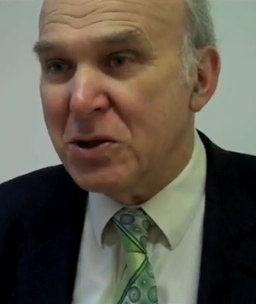 Vince Cable used a wide-ranging speech at Demos this morning to set out his party’s economic manifesto. But he conceded that his party’s flagship tax policy was not as radical as other approaches to redistribution.

Asked by Left Foot Forward about his policy of raising the tax threshold to £10,000, which the Lib Dems estimate would lift 3 to 4 million people out of taxation but would also result in a £700 tax giveaway to all earners including the wealthiest, Cable said:

“So trying to invent very, very targeted programs – of the kind represented by the tax credit system – I don’t think is the best way of dealing with it.

“A simple tax cut which takes people out of tax altogether so low paid workers and pensioners – a lot of them – just don’t fill in a tax form, don’t need to go anywhere near it, is a much cleaner way of dealing with it although [indistinct] it’s redistributive effects may be not quite as radical as you get with tax credits.“

As briefed yesterday evening, the Liberal Democrats’ Treasury spokesman talked about banking reform and set out how he wanted to see UK Financial Investments “giving a much firmer steer to those banks to act in the wider national interest,” a reference to the takeover of Cadbury’s by Kraft using financing from RBS, a part-nationalised bank. In addition to this and tax reform, Cable discussed his parties’ approach to the fiscal deficit and a strategy for sustainable growth.

Cable said the Conservatives were “wrong to be so dogmatic” on the speed of deficit reduction. He went on to say:

“The government plan to reduce this deficit by half over four years may also prove to be too laid back for the markets. It is however a starting point. It is also a major challenge and tough by the standards of previous fiscal tightening.”

Speaking on regulatory supervision, he described the Conservatives’ plans to break up the Financial Services Authority as “not clever”:

“I don’t agree with George Osborne that it’s sensible to split [the FSA] up. The implication of splitting it up is … [separating] systemic risk and consumer protection so you lose the joint working … You end up spending a year, two years with people jostling for jobs in these new institutions.”

6 Responses to “Cable sets out economic vision, but tax policy could be more “radical””