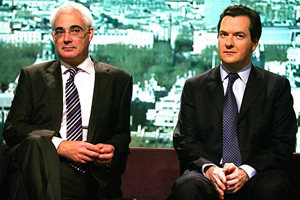 • Alistair Darling delivered his pre-Budget Report, getting a 66 per cent score from Left Foot Forward for his troubles. Among the main announcements were a 50 per cent tax on bankers’ bonuses – criticised by both the Tories and Lib Dems – a 0.5 per cent increase in National Insurance contributions from 2011 and a rise in VAT back to 17.5 per cent. There had been talk of a widespread rift between the Prime Minister and Chancellor, flatly denied by the man himself who today said:

“Alistair Darling and I have worked together for many, many years, and we worked closely together and continue to do so. I want to praise him for the pre-Budget report that he has given.”

• After months of anticipation, the Copenhagen summit finally began on Monday, with Climate Change Secretary Ed Miliband, in an exclusive article for Left Foot Forward, writing:

“Whether these talks succeed or fail, the world will be transformed by the middle of this century. Our choice is how. We can choose a future we want for ourselves and our children or we can let events choose a less positive future for us.”

Today, Britain and France led the European Union in committing more than €2bn (£1.8bn) a year to help poorer countries cope with global warming, though delegates from developing countries remain frustrated at the perceived lack of progress, pace and urgency in the negotiations. Left Foot Forward will continue to bring you all the latest from our reporters in Copenhagen, and on Sunday we will publish an exclusive poll examining public attitudes to climate change and Copenhagen.

• The latest tranche of expenses revelations emerged yesterday, with “Labour toff” Quentin Davies’s £20,000 bill to repair a bell tower the most flagrant example of abuse. Tory toff George Osborne, meanwhile, did his Bullingdon best to live up to his image by claiming for a chimney sweep – that’s right, a chimney sweep. In 2009. Vote Blue, go Dickens…

Tuvalu, the tiny Pacific island idyll, winners of the first ever “Ray of the Day” award at the climate change summit in Copenhagen for standing up to the big boys and refusing to back down from demanding a legally-binding deal, saying:

Republican Congressman Jim Sensenbrenner, who this week voiced his outrage at the Environmental Protection Agency’s ruling that greenhouse gases are dangerous to human health; I mean, how dare they? Who do these scientists think they are to contradict a climate-denying congressman from Wisconsin?! A man in the pocket of big business who has made several overseas trips paid for by lobbyists, in clear breach of congressional rules.

The Met Office data which predicts 2010 to be the hottest year on record – shattering the spin of the Sensenbrenners of this world who believe 1998 marked the end of global warming. They Met also predict that half the years in the next decade will be warmer than 1998. As we will explain (again) the past decade has seen some of the highest temperatures ever recorded:

Politically, the most popular item on twitter this week was the pre-Budget Report, predictions, commentary and reactions to Wednesday’s announcement. Here is a selection of the best:

@AmyLTaylor: Good to see that everyone’s main concern, bingo, has been handled by the government. http://trunc.it/3xfj1 #pbr09

@warrenmorgan: #PBR09 the serious Chancellor has sat down and the schoolboy debating team captain is reading his soundbites.

13 Responses to “Look Left – The Week in Fast Forward”