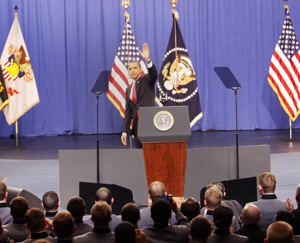 • Barack Obama’s midweek announcement of 30,000 more troops to Afghanistan signalled, the President would like us to believe, the beginning of the end of the Afghan conflict. He said:

“After 18 months, our troops will begin to come home.”

His speech received a mixed reaction among bloggers, and a surprising one at that, with Sunny Hundal of Liberal Conspiracy fame coming out in support of the President’s plans, while MoveOn, one of the biggest backers of Mr Obama, broke ranks in opposing the surge.

• Following a sustained rise in the polls, Gordon Brown had one of the best Prime Minister’s Questions of his reign on Wednesday, with all but the bluest of Tory blue bloods conceding that their boy took a hell of a beating, sending the sketch writers into a frenzy of delight at the PM’s pay-off quip that the Conservatives’ inheritance tax policy was “dreamt up on the playing fields of Eton”:

“Dave’s face was a picture,” wrote Ann Treneman of the Times, who joked that the Tory leader was discovering that “it’s toff at the top”;

“They behaved as though they were going to win the next election. Haven’t looked so cheerful since the 2007 floods,” added Quentin Letts in the Mail under a headline that read “Flat caps and whippets were thrown into the air!”

• Islam4UK, the group which attacked Shadow Community Cohesion Minister Saeeda Warsi on Monday, looked to be imploding as the full glare of the media was shone on them – including a prime time slot on the Today programme on Wednesday, in which extremist-in-chief Sayful Islam failed to show any regret at the egg-pelting. To add to their woes their website, which is now blocked, inadvertently revealed to the world what had long been suspected, that they are nothing more than a front for fundamentalist headbangers al-Muhajiroun.

City Minister Lord Myners, who yesterday launched a ferocious attack on institutional shareholders for their failure to rein in bankers’ pay, and on Wednesday hit out at the banks themselves for the excessive bonuses sprinkled about like confetti – 5000 City bankers will be earning more than £1 million in bonuses this year.

David Davis, who this week emerged from the shadows as the most high-profile Conservative to come out as a climate change denier, punching a further hole in David Cameron’s “nice Tories” rebrand following the Hannan/Kaminski outrages. Writing in yesterday’s Independent, the former Shadow Home Secretary said:

“The planet appears to have been cooling, not warming, in the last decade”

For what seems the umpteenth time, Left Foot Forward will repeat the facts:

Guido’s bear trap and demolition job on our article about G20 countries still in recession, following this simple Venn diagram, so simple even a seven-year-old could do it! As for definitive evidence of whether or not Spain is in the G20, G20+ or G∞, your guess, mes amigos, is as good as ours…

@yawp77: AIDS is Preventable and Treatable http://bit.ly/4MyQ90 – 40 cents a day can keep someone with AIDS alive #red

@KarlaSugar: Read this if you’re okay with getting a little choked up at work: http://bit.ly/7Qb4V8 It’s short & extremely powerful. #red #AIDS

@DameElizabeth: One Color Unites Us on WORLD AIDS DAY. Show your support for @joinred. Buy (RED) Save Lives. #red

2 Responses to “Look Left – The Week in Fast Forward”