Hungarian Fascists have met in a pub in Camden. The thugs from Jobbik, allies of the BNP, met at the Gloucester Arms pub on Leighton Road. 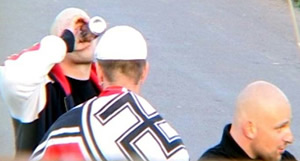 Hungarian Nazis have held a meeting at a pub in Camden. Fifty thugs from the far-Right Jobbik party – which sits alongside the British National Party in the European Parliament – met at the Gloucester Arms in Leighton Road, Kentish Town, last weekend.

Jobbik, like their BNP counterparts, have long been accused of violent extremism, anti-Semitism and Holocaust denial, and were today described by the Leader of Hungary’s Opposition as an “extremist scandal-party” which has “violence written on its flag”.

Their slogans include “Who would like to live as Hungarians in Hungary”, and they have campaigned to decriminalise the banned paramilitary Hungarian Guard terror group.

Earlier this year an organisation allied to Jobbik called “The trade union of Hungarian police officers prepared for action” distributed a newsletter which said:

“Given our current situation, anti-Semitism is not just our right, but it is the duty of every Hungarian homeland lover, and we must prepare for armed battle against the Jews.”

It is not just Hungarian Fascists holding meetings in London pubs, however. South African white supremacist group “The Orania Movement” reportedly hold regular meetings at the Aardvark pub in Canada Water in Docklands.

A Searchlight investigation discovered that “the country that provides the largest number of visitors to the British National Party website is South Africa”, and that there are a growing number of South African BNP members – the most prominent being Arthur Kemp, editor of the BNP website.

The landlords of neither the Aardvark nor the Gloucester Arms were available for comment.